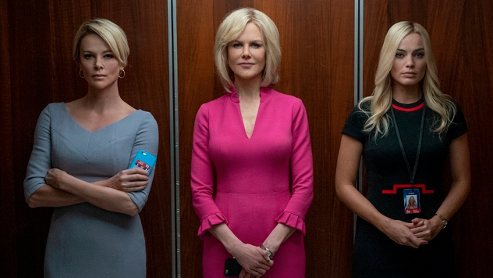 Bombshell is the feature film account of the Fox News sexual harassment meltdown that ended the career of founder Roger Ailes, news celebrity Bill O’Reilly and others. The film is not subtle, but is occasionally - and disturbingly - humorous with an element of preachiness. The excellent cast (albeit offering a series of prosthetic facial caricatures) lures you in to the chilling sexual culture of the right-wing USA tv channel Fox News, a land of many female employees, and limitless moral compromises, as it fills its airwaves with older white news anchors, and much younger women, many of whom fit the description that is the film’s title. Bombshell tells the story of ex-beauty queen Gretchen Carlson (Nicole Kidman), older, and as presented here, growing more independent and less deferential to men with every broadcast, a woman ultimately dismissed from her prestigious job for advocating the return of the assault rifle weapons ban. She fought back with a lawsuit that eventually shamed and unmasked paranoid casting couch reptile Roger Ailes (John Lithgow). Her case is pitched as a major moment of the 2016 US election year for Fox star Kelly (Charlize Theron), a smart and sussed anchor who took criticism from the station’s audience when she stopped declaring Jesus and Santa Claus were white, and began berating Republican presidential candidate Donald Trump for his lifelong misogyny. In the film, Kelly is reluctant to speak up in support of Carlson, but is eventually moved to act, even as she is is clearly cunning enough to allow this to be of personal benefit. Naive, idealistic conservative Kayla (Margot Robbie), a fictional young producer with Carlson’s show, then O’Reilly’s, unfortunately experiences the Weinstein-esque Ailes in a highly disturbing scene - as his latest attempt to sexually proposition a new protege, offering further evidence of his sordid and vile predilections.

All three narrate their chunks of the story, taking us through Carlson finally seeing the writing on the wall for her, and plotting her revenge, and Kelly’s eye-opening realisation that these rabid right wingers she’s been throwing red meat to, will hurt her or her family, fanatics egged-on by then-candidate Donald Trump. Kayla has a fellow producer, Jess (Kate McKinnon), to guide her through the minefield of this toxic, egomaniac-packed newsroom. Jess is gay and knows how to keep her head down. A flood of clips from actual “Fox & Friends” moments (real and re-created) and others making sexist remarks on air and within the offices, capture a workplace where women either silently endured the assaults, or elbowed back to little effect. We also see the hiring practices that got all these women put behind clear-glass desks to reveal their short skirts and long legs. "Television is a VISUAL medium!” is the Ailes mantra. But legions of men at all levels of the organisation felt free to comment, sometimes luridly, on women’s appearances, and proposition them if they were in positions powerful enough to demand compliance. Roach, screenwriter Charles Randolph and the dazzling cast keep adding new members, first scene to last, and capture the chilly paranoia in that newsroom, some women bridling at their treatment and happy that Carlson at least, is standing up to the treatment. Other women are handing out “Team Roger” t-shirts as the scandal explodes into America’s legitimate media and the Rupert Murdoch owners of Fox launch an investigation into Ailes and the culture he created.

Connie Britton plays the naïve wife within this horror show, Mrs. Ailes, a virulent right-winger who feigns ignorance at the accusations against her husband. A third Oscar winner (after Kidman and Theron) shows up as Ailes’ lawyer, with Allison Janney playing Susan Estrich. None of this however, would work without impressive villains. Lithgow’s prosthetically-altered Ailes is, if anything, more deranged than Russell Crowe’s portrayal of Ailes in The Loudest Voice. Hobbled, hideously obese and raging like Dr. Strangelove, as he waddles about on his zimmer frame, paranoid and cruel, he orders his pretty young things to “Stand up and give me a twirl,” then show more and more leg, and demands “loyalty” above all. Media oligarch Rupert Murdoch, who has sewn crippling dissent via media smears, dirty tricks and lies in his native Australia, Britain and the U.S., is given a cold, calculating turn by Malcolm McDowell.

Bombshell may not win converts from the Trump-devotees who watch this odious right-wing channel in America, but if they do remain unaffected by the film, when they should feel chastened and chilled, then further hope will be lost that Trump’s obscene tenure will end later this year. 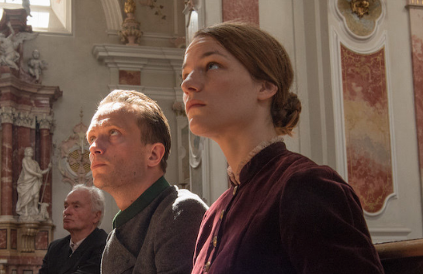 Written and Directed by Terrence Malick

Breathtakingly beautiful, poetic, soulful and chillingly topical, Terrence Malick’s A Hidden Place searches for righteousness in a time when cruelty and evil are the popular will. This is a three hour meditation on the bravery of conscientiously objecting to the actions of one’s government and refusing to swear loyalty to a leader, when to do so would be a betrayal of yourself and your morality. It’s a World War II allegory for our times, a lone Austrian refusing to utter and salute “Heil Hitler!” even though every Austrian around him insists on it. And it’s a love story, an all-consuming romance that cannot withstand the test that this moral choice forces Franz Jägerstätter to make. Franz, played by August Diehl is an Alpine farmer who, with his wife Fani Valerie Pachner has made a life in in their village, Radegund. It’s a gorgeous place, a world peopled by those content with lives of physical labour, ruled only by the demands of each changing season. They plow and plant, care for the cows, chickens and pigs, scythe the wheat in late summer and haul it to the waterwheel grist mill with their donkey. Malick presents Radegund as a quiet pastoral idyll, living in harmony with nature, all but untouched by the modern world. But it’s 1939 and World War II is gathering pace. Hitler has annexed his native Austria into the German Reich. And Austrians, especially the village mayor Karl Markovics, are thrilled. Franz and Fani pay little heed to the beer-swilling pundits of the village green. They’re too consumed with each other, their little girls and their work, to pay it much heed. Then, the Reich invades Poland and Franz is drafted. He details the training at a nearby ancient fortress in long, loving letters to home. But as the recruits are indoctrinated by triumphalist documentary footage of the senseless, dehumanising slaughter their cruel, amoral state and its twisted leader impose on Europe, Franz has attacks of conscience. Fortunately, he’s sent home after training - but he’s made up his mind. He will not swear loyalty to this monster. He will not take part in this immoral horror. As France collapses, Fani, Franz and others in the village hope that the war is over and he won’t face the choice he’s already made his mind up about.

This is Malick’s most poetic film since The Thin Red Line. It is a reminder that nobody’s motion pictures are as stunning to look at as Malick’s. with that beauty offered as a vivid underpinning to the film’s over-arching message. How could anyone this attuned to this world possibly go along with the unnatural destruction, inhuman cruelty and slaughter of a state that has gone mad, led by a hate-mongering deranged demagogue? The camera roams and hovers, hanging on the shoulders of characters — on a farm field, on a country lane, in a training facility or later, in a prison — as we hear and see snippets of conversation. Too much of it however, is in voice- over and a lot of is couched in the language of soul-searching profundity. Fani is the more devout of the two, not puzzling over Franz’s choice, believing that God will intervene on the side of the righteous, trying to be resolute in the face of the awful consequences everybody involved knows are coming. An interesting stylistic touch — voices are never raised as Franz and Fani debate and discuss this, and then involve a few neighbours of the same mind, and even the village priest. Faith is extolled and tested, but even the Catholic Church wants him to do what it does — just go along to get along, ride this whole Hitler thing out. Once Franz’s decision becomes public, though, tempers flare, voices rise, shunning sets in and threats begin. Dealing with military authority and The State has an altogether different tone. Most of the dialogue, save for the odd unsympathetic villager, is performed in English. German, in this film, is the language of authority, hate and cruelty.

We need only that moment when Franz declines, in uniform, to swear an oath to Adolf Hitler, to know what’s coming. If we’ve learned nothing else from World War II films, it’s that sadism and savagery are best delivered in German. And resorting to violence is easier after we’ve become numb to the language of violence. The performances are sympathetic, but for all the close-ups and efforts at absorbing us into these lives in this world, the characters remain remote, removed. There’s warmth but nothing that approaches emotionally wrenching. Malick, of course, takes his time getting us to this point. He’s an over-indulgent filmmaker, and as much as I appreciate the meditative rhythms of story, inner conflict, setting and on sequences here, at times A Hidden Life is slow to the point of standstill. It is so long, that it buries fine cameos by Matthias Schoenaerts, as a lawyer who calls this protest “madness” that “no one outside of this prison” will ever hear of, and the great German actor Bruno Ganz plays an aged officer who sits in judgment of Franz’s “treason” to The Leader and his regime. Still, it’s a lovely, immersive experience, a film that invites the viewer to ponder the nature of conscience, the bravery of conscientious objection and the realisation of how what happened there could happen anywhere that people embrace ignorance and hate, and others either go along with them, or do nothing.