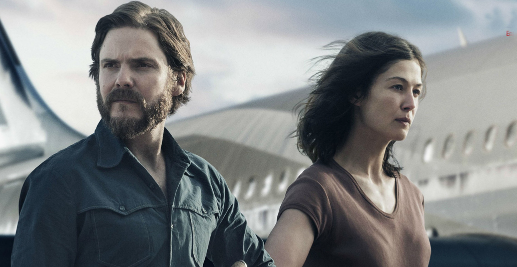 Entebbe (also released as '7 Days in Entebbe') is a blase stroll through a desperate and harrowing affair, inspiring more boredom than fear and utterly lacking in suspense. The 1976 terrorist takeover of an Air France jet, collusion with an outlaw state - led by a vain, delusional and murderous lunatic with Jews singled out among the passengers for mass murder by German and Arab hijackers - at the time inspired fierce debate, within and without the Israeli government - but little of it is shown here. The operation was planned, re-planned, rehearsed and re-rehearsed, with every passing hour raising the stakes and the tension. Not that you’d know that by seeing this film.  Daniel Brühl and Rosamund Pike play the idealistic/fanatical German remnants of the Baader-Meinhoff Gang, leftist terrorists in disarray, desperate for a face-saving/status reviving action that would put them back on the map. Under the overall command of the Popular Front for the Liberation of Palestine, and with two Arab accomplices, they brazenly brought machine guns and grenades on board a Tel Aviv to Air France flight with 248 people on board and took control.

The script hints at the naive radical book publisher “Boni” Böse (Brühl) as being idealistic, but not the hardened, committed soldier for the cause that those who were fighting to take their homeland back from Israeli domination had hoped for. The script has Brühl’s character overly-concerned about how Germans killing Jews might look in the headlines – because he insists that he’s no Nazi.  Pike brings her “Gone Girl” crazy-eyes expression to Brigitte Kuhlman, his co-leader, even though the actual hijacking is shot and edited in a most perfunctory, unexciting fashion.

Back in Israel, the government of Yitzhak Rabin (a low-energy performance by the great Israeli actor Lior Ashkenazi) treats this as not just a military threat, but a political one. Will Defence Minister Shimon Peres (a hideously odd-looking Eddie Marsan), militating for a military response straight away, use this to bring down Rabin’s government?’ Whatever little suspense there is on board the jet, which travelled to Libya to re-fuel and the on to Idi Amin’s Uganda, is frittered away in the quietestIsraeli Cabinet meetings in recorded history. There’s no fractious debate, no voices-raised considering of the stakes of negotiating with terrorists, no bickering over how the world will see their action or inaction, only silence from virtually every actor on set apart from Marsan and Ashkenazi.

Then there’s what might have been the most interesting parallel in the story, the Israeli modern dance company putting on an arresting, symbolic “Shed your Orthodox Fanatic Garb” piece (choreographed by Ohad Naharin), led by lead dancer Sarah (Zina Zinchenko) - their rehearsals and performances functioning as a metaphor for framing the action as Sarah’s commando/lover (Ben Schnetzer) prepares for war. The commando training, a staple of such films is given short shrift – but not the dancing! The hostages barely make an impression, as a group or as individuals, apart from a gruff French aircrew engineer (Denis Ménochet).

Nonso Anozie certainly has the look, the braying self-promotion and the chuckle of Idi Amin, but little of the murderous menace. Too much time is wasted on the moral debates of the two German hijackers and a half-hearted attempt to fill in their back story. That contributes to the sense of a film that tries to have it both ways — jingoistic Israeli decisiveness and righteousness (the Holocaust is invoked), vs. Europe’s youth, consumed with passionate support for legitimate Palestinian grievances and the world’s lack of attention to them.

HOW TO TALK TO GIRLS AT PARTIES 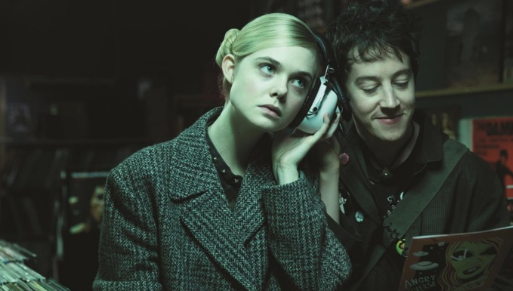 Teenage love as a narrative hook shows up again in this nonsensical item with Zan, an alien in the body of Elle Fanning, who just happens to be visiting Earth with her colony of existentialist bampots. Her unlucky paramour is Enn (Alex Sharp) apparently a punk fanziner who is far too polite and well turned out for system-smashing and who stumbles inanely when it comes to chatting up girls. Clogged up with de rigeur pins, badges and battered biker jacket, Enn is on the hunt for a party, with his fat pal and blond fellow pseudo-punk John and Vic (Ethan Lawrence and Abraham Lewis) when they stumble across the temporary home of a visiting group of aliens. There he meets Zan, a rebellious young alien who wishes to be more than just a tourist, and sees Enn as her ticket out of the cult.

Writer-director John Cameron Mitchell and co-writer Philippa Goslett have loosely adapted a short story by Neil Gaiman (The Sandman, Stardust, American Gods, Coraline) but the script is horrendously unfocussed, constantly veering off to zone in on alien politics and a banal detour into Enn’s family history. Nicole Kidman is completely superfluous as Boadicea and could have been cut out completely at no loss whatsoever to the film. The writing seems to be frantically trying to build a whole world when a modest bedsit would do.

Worse, the entire film looks dreadful, and the CG effects are nothing short of an eyesore. The opening animated sequence is tacky and the inherent ‘effects’ hijack the film’s all-too-brief bright spots. One sequence in which Zan is revealed to have a talent for improvisational art, soon turns into incomprehensible nursery school computer-generated psychedelia – apparently to represent Zan and Enn consummating their love. Probably.

Like all Gaiman-associated productions, this is nowhere near as weird, funny, or edgy as it thinks it is – it is puerile, banal and embarrassingly twee. As the plot descends into a metaphor about the alien colony eating their young, you start to feel embarrassed for everyone in the cast, shockingly including Ruth Wilson, Simon Anstell and Matt Lucas - who all signed on the line that is dotted, and ended up being flung into this crazy guff – which is devoid of any real substance or creativity.