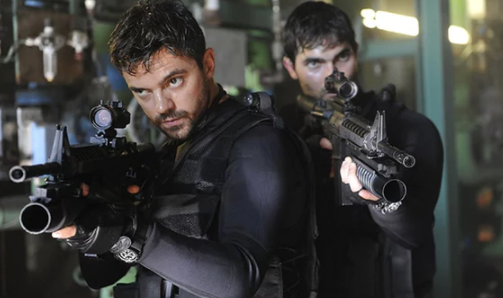 Former spy Duncan Falconer’s books inspired this special ops outing, but largely it’s a huge disappointment. A fundamentally mediocre script added to poorly realised action sequences and a lousy score – not to mention inadequate casting and some quite dreadful performances put director Simon West on the ropes, despite his best endeavours to lift things up. SBS commando John Stratton (Dominic Cooper) struts along, bearded and in black, with a macho self-awareness, on his return to a boathouse home in London – where to his dismay it’s apparent he’s been dumped by his girlfriend.

Even in the 19th century people much like today, devoured celebrity gossip, albeit without the instant availability of such titillation by digital means. City communities desired as much tittle tattle as possible about murder, depravity and sex, and here Juan Carlos Medina brings the theatres of the day in London to life in The Limehouse Golem. A serial killer is plaguing the streets of England’s capital as performer Elizabeth Cree (Olivia Cooke) is charged with the murder of her husband. Detective Kildare (Bill Nighy) must tackle both these cases, learning about Elizabeth's strange life, her relationship with fellow performer Dan Leno (Douglas Booth), and the beliefs of the locals of Limehouse that a fabled Yiddish monster is to blame for the killings. In his investigation, he encounters music hall performers, prostitutes, Karl Marx, and a labyrinthian tale of murder and mayhem. The film opens on Leno as he introduces the tale, as a means of indication to the audience that all is a matter of public display. Moving from music hall to dressing room to police headquarters to the dirty streets of Limehouse, Medina frames his characters frequently, and literally, in doorways, mirrors, between pillars, in windows with the anxious and insatiable public looking on. The often-present red tones are not of love, but sex, passion, and blood; but the ever-present green infuses the film with its barely-hidden undertones of jealousy and rage. And shadow is also frequently invoked on the faces of the characters, as even in the theatre, there must be an air of mystery.

As the detective trying to solve both cases, Nighy occupies the centre of the story, but he keeps his performance tight and economical, as fits his role; subtlety and determination mark both the character's professional and personal life. Douglas Booth gives Leno a dramatic flair, but hints at the darker forces that make Leno both something of a mystery and an actor for the downtrodden lower classes. Top turns by Eddie Marsan and María Valverde add colour and dimension to the music hall world. But the film belongs to Olivia Cooke. Her Elizabeth is a young woman ahead of her time, unable to reconcile her intelligence and desire for independence with a society that insists on putting her in her place as a woman.