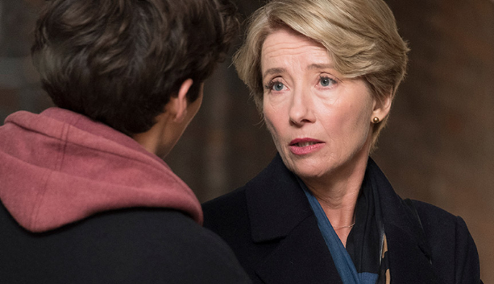 Directed by Richard Eyre, Ian McEwan’s adaptation from his novel, The Children Act has judge Fiona Maye (Emma Thompson) adjudicating in her London court room on an urgent case of conjoined twins. If the babies are left attached, both will die. If the decision is made to split them apart, then one will live. Dispensing power with empathy, she rules in accordance with the 1989 Act of Parliament from which this film shares its title — but she has difficulty in reconciling the saving of one life at the expense of another, describing it as “a case of law, not of morals.” She then returns home to her luxurious flat to be met with her husband Jack (Stanley Tucci) declaring that he wishes to have an affair, as the couple haven’t had sex in 11 months, and Jack has been complaining to his wife about her workaholic habits for almost as many years. He enquires whether both of them should suffer so that their marriage can survive, or would it be more humane to allow one partner their freedom while the other is left to feel unwanted.

The Children Act is a soulful and sophisticated adult drama that works best during the initial hour, when the story is still setting its terms and carefully moving its characters into position. Elegant and beautifully performed by an accomplished cast, the film opens up when a new case arrives, concerning 17-year-old Adam who will succumb to leukemia if he doesn’t receive a blood transfusion. However, he and his parents are devout Jehovah’s Witness whose faith teaches that God lives in the blood, and to accept the blood of another person would be ethically unclean. Yet to reach the age of 18, the boy is a minor, therefore his fate ultimately rests with Fiona. Richard Eyre directs expertly and precisely but I felt Whitehead’s performance detracted slightly from the tone exhibited by the remainder of the cast. Through his manic displays, from the moment that he first meets Fiona (whom he refers to as “my lady”), Whitehead plays Adam as an oddity whose faith manifests itself with an odd mix of conviction and rebellion. On her personal visit to the hospital by Fiona to help her ascertain his commitment to his values, his wide-eyed wonder belies his apparently imminent demise. He shows all the usual teenage tendencies, but they’re bent towards sincerity instead of sarcasm. It makes for a character who is extremely difficult to accept as credible.

Thompson inhabits Fiona as a woman who’s constantly judging herself in secret, every guilty verdict reflecting some guilt of her own. As her relationship with Adam grows uneasily obsessive, The Children Act veers towards melodrama, but Thompson powers right through these histrionic moments in a story that extrapolates everyday domestic matters into life-or-death scenarios. It’s through her that we feel the heartache of an empty home, as our attention is returned to the things that each of us has to lose so that we can manage to live. No matter how disingenuous the story becomes, she makes it absolutely heartrending to watch her character’s composure gradually diminish. Despite being a bittersweet story, it is strangely comforting to arrive at its moral centre. 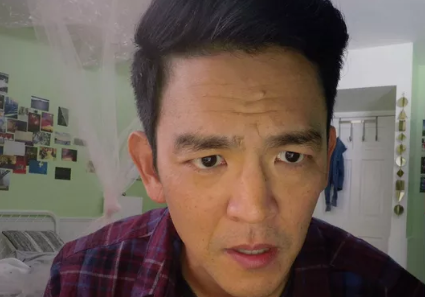 David Kim (Cho) is recently widowed, and he’s been having a hard time connecting with his teenage daughter Margot (Michelle La). One morning, David wakens up, only to find that he has missed several late-night FaceTime calls from Margot. As the day unfolds, he discovers she’s not at school, and more surprisingly, she didn’t come home the night before. Detective Rosemary Vick (Messing) is assigned to the case, and with her help, David begins digging through his daughter’s computer, her search history, and the live-streaming services he never knew she used. They initially suspect she might have simply run away, but as the evidence piles up, it becomes apparent that something  sinister has happened to Margot.

Director Aneesh Chaganty, who co-wrote the script with producer Sev Ohanian, has a couple of themes on his mind with Searching. Essentially this is a film about the way we deal with grief. David’s emotions closed down in response to his wife's death, reshuffling his memories to the point of forgetting her birthday, and hiding any videos which might spark painful memories from his computer’s search results. While he thinks Margot has been doing well despite the bereavement, as he investigates, he slowly realises that in fact she has been struggling and exhibiting an inability to cope with the grieving process. Searching also illustrates how people use online outlets and social networks to express feelings that would perhaps be better discussed in real life. Margot is comfortable talking about her mother to anonymous strangers on a video chat, but doesn’t wish to bring up the issue with her own father, which pushes them further and further apart.

The film exhibits elements of effective shock, not just in creating a sense of constant, palpable tension, but also in the way it pulls off authentic, effective emotional beats. The initial five minutes of the film tell the entire backstory of the Kim family, opening with the mother’s computer (running Windows XP) as the family starts documenting Margot’s young life. Through video clips, glimpses of emails, and calendar schedules, we learn that in the ensuing years, Margot’s mother developed cancer, fought it into remission, suffered a relapse, and finally succumbed just as Margot was about to start high school. It’s legitimately affecting. By the time Searching catches up with the present, and the iMac the family uses at home, the film has set up an emotional foundation which propels the remainder of the film. As a filmmaker, Chaganty clearly knows a few things about merging technology with filmmaking. Searching’s rhythm and pacing stand out, from the way the camera punches in and moves around computer screens to the way it creatively adds new angles to the mix, while still adhering to its basic conceit. More often than not, the fact that we’re watching an ersatz computer screen falls away completely, leaving only the drama of David’s search. It feels impressively cinematic, which is no small feat, given the stylistic limitations. Cho also delivers a strong performance, capturing the denial, grief, and anger David experiences as the situation with his daughter becomes increasingly more dire.  The film does, however, have its flaws. Messing’s performance seems out of sync with the rest of the actors at times, as if she’s playing scenes from a much more melodramatic TV show.  Ultimately, the film unfortunately doesn’t know when to pack it in. It finally comes to a conclusion with an extended coda that really tests the audience’s suspension of disbelief, and while it does provide a final moment that some audiences will not doubt be craving, the way it gets there is easily the weakest part of the film.