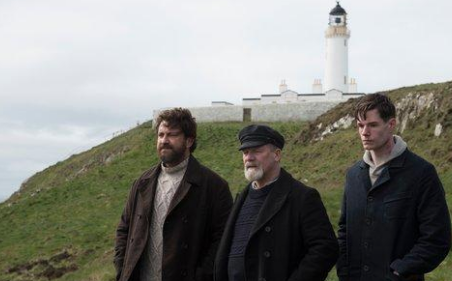 The premise, admirable direction, and tense performances make this film an experience that deserves some attention. It's based on a true story where three lighthouse keepers mysteriously disappeared in 1900 in the Flannan Isles. Though its still unclear how the three keepers disappeared, it remains a myth that has evolved into poems, operas and music. The Vanishing is yet another interpretation of what happened to the three keepers, by weaving in a tale of greed, mistrust, strangers, and gold. The three roles are filled comfortably by actors Peter Mullan, Gerard Butler and Connor Swindells.  Thomas (Mullan) is the caretaker of the group while grieving over the loss of his family, James (Butler) is the hands-on keeper who has a family waiting for him on the mainland. Donald (Swindells), on the other hand, is the newcomer of the trade. He is young, inexperienced, and shares a rightfully off-putting chemistry with the other two characters. It all gets even more off-putting when the three find a boat, a chest, and a body washed ashore. And within minutes, a sudden act of violence triggers a chain of events. Although the script doesn’t make much use out of intriguing dialogue or deeply rooted motivations, all three actors provide thoughtful, tense, and extremely competent dramatic performances.

Mullan comfortably sells Thomas’ grief and weariness as a man who has little left to look forward to. Swindells proves he is more than up to the task of finding the perfect combination of emotions like guilt, uncertainty, and suspicion. In fact, watching  Swindells flow from one emotion to the other is perhaps the smoothest transition in the film. An unusual but memorable performance comes from Butler, who brings a grittier side of him than has been seen previously. Being the lead actor and one of the producers of the film, Butler shows on screen from start to finish that this is a story and character he really wants to explore and share with the audience. The best scene in the entire film is completely dominated by Butler, and the best scene is not about the violence, but the intimate, tense build-up to it. Butler really needs to make more films like this. The lasting impression is the setting in Scotland. We feel the cold, harsh wind of the environment. We cower from the scary indifference of nature, where the characters don’t fight against the storm, but rather outlast it. The lighthouse is almost a character on its own. From the cracks in the walls to how it holds itself against the storm, the interior design of the lighthouse breathes a gloomy forbidding atmosphere. Within the immersive background of the film, the camera scarcely moves and the music is barely existent. The dialogue is all delivered in a low growl as the director steers a fine line between having his film be moody and painfully slow, with the line being the edge of a cliff anyone could fall off at any minute. The performances are excellent, the cold backdrop and mysterious atmosphere of the lighthouse offer a film that for me was an extremely satisfactory experience. 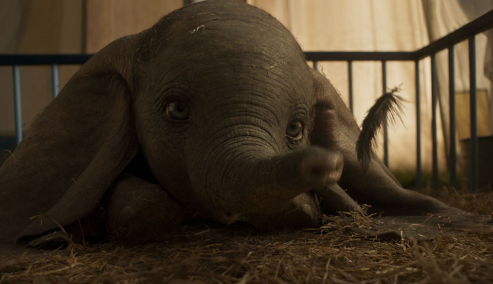 Originally based on the book written by Helen Aberson and Harold Pearl, 1941's Dumbo was the fourth animated feature film made by Walt Disney Productions. Originally conceived as a short film, Dumbo was reworked as a low-budget feature to help recoup the financial losses of Pinocchio and Fantasia. Now, many years later Disney Productions introduces the iconic character to a new generation with a live-action remake directed by Tim Burton. While the original film is told through the eyes of the titular flying elephant, the remake, written by Ehren Kruger, isn't as interested in charming anthropomorphic animal characters like Mrs. Jumbo, Timothy Q. Mouse, and Mr. Stork. Instead, relatively uninteresting human characters are central to the narrative. It all begins when Max Medici (Danny DeVito), owner of the struggling Medici Bros. Circus, purchases an expectant mother elephant in hopes her adorable offspring will bring in huge crowds. The boisterous ringmaster's dreams are dashed, however, when the elephant calf is dismissed as a sideshow freak due to his oversized ears. Forced to sell Dumbo's mother to keep the business afloat, Medici enlists circus cowboy and World War I veteran Holt Farrier (Colin Farrell) and his children, Milly (Nico Parker) and Joe (Finley Hobbins), to care for the peculiar pachyderm. When the precocious youths discover that Dumbo can use his massive ears to fly, however, Medici's struggling circus quickly becomes an enormous success, attracting the attention of entrepreneur V.A. Vandevere (Michael Keaton) who recruits the baby elephant for his larger-than-life Coney Island amusement park, Dreamland. While Dumbo performs alongside aerial artist Colette Marchant (Eva Green) the Farriers discover that Dreamland isn't the place where dreams come true.

Burton's new take on Dumbo has a few things going for it but more not operating in its favour. Burton’s technicians work together to create a picturesque, yet lived-in storybook environment. Using lighting, colour, texture, and shape, they convey the warm but run-down and distressed feel of Medici's circus. Practical sets, props, and special effects come together seamlessly to realise Burton's unique vision – sadly though there isn't a better story to go with all the spectacle. Ehren Kruger's script uses human characters to interpret the baby elephant's journey, but these individuals are cardboard cut-outs at best and utterly unlikeable at the worst. Beyond the cute, computer-generated elephant, there isn't a real semblance of heart or magic to be found in this film. Burton’s film has his signature visual flair and a cast featuring frequent collaborators like DeVito, Keaton, and Green and although it might look like a Tim Burton film, it’s an unrelentingly dark outing and devoid of any real emotion. If you're expecting Burton's Dumbo to compare to Disney's other live-action remakes like Cinderella, The Jungle Book, or Beauty and the Beast, prepare to be underwhelmed. Apart from the undoubted charm of the titular character, some excellent special effects and Keaton’s amusing toupe, Dumbo may have been able to overcome his flaws and soar to new heights, but Burton struggles to get this misguided remake off the ground at all.