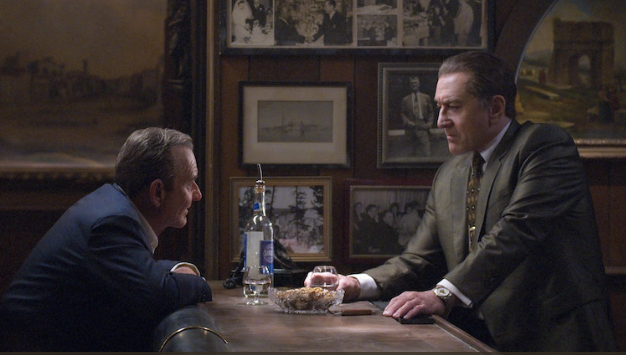 With the film industry in a state of flux, Martin Scorsese has elected to respond to current seismic shifts in the way feature films are made and consumed in the same way that he did when starting out around fifty years ago, by creating brave, bold and original work that is so ambitiously conceived and brilliantly executed that it is impossible to ignore them. Earlier in 2019 we saw the release of Rolling Thunder Revue: A Bob Dylan Story By Martin Scorsese, a sprawling and playful recounting of Dylan’s legendary 1975 Rolling Thunder Revue that combined fact and fiction to both elevate and poke holes in Dylan’s career. That film was undeniably brilliant, but even that comes across as a mere prelude to his latest effort, the long-gestating crime drama The Irishman. Those assuming that this film is little more than Scorsese returning to a genre that has served him well in the past as a way of re-establishing his commercial footing in the wake of the disappointing reaction to his sombre but outstanding religious exploration Silence, are going to be shocked and stunned to discover that this is not a case of a filmmaker on the ropes looking for cover. Epic in scope but intimate in scale, this is a true crime drama, a detailed examination of an almost forgotten but undeniably important aspect of American history in the latter half of the 20th century - and the deep recollections of a man looking over his life and ruing many of his accomplishments, due to the ultimate cost of them to him. This is also not just one of the very best films of 2019 but a film that is destined to go down as one of the major works in the entire Scorsese canon.

The Irishman is based on I Heard You Paint Houses, a 2004 book by Charles Brandt in which he recounted the life story of Frank ‘The Irishman’ Sheeran, a one-time labour union official and mobster who claimed to have been the hitman for such infamous killings as the demise of Joey Gallo and the still-unsolved murder of labour union leader Jimmy Hoffa in 1975. Needless to say, the title does not have anything to do with his domestic re-decoration abilities—it references the blood that would splatter on the walls after a gun spree. It opens with two different framing devices. In the first, set roughly at the end of the 20th century, a now-elderly and wheelchair-bound Sheeran (Robert De Niro) begins narrating the story of a life that saw him go from being a soldier fighting at Anzio in WW II and an ordinary truck driver back home, to a mob killer and right-hand man to Hoffa (Al Pacino) himself. In the second, set in 1975, Sheeran is setting off on a long and insanely complicated road trip with his other boss and mentor, a higher-up-the-mob-chain-of-command Russell Bufalino (Joe Pesci), and their wives to Detroit for a wedding. As the journey, which serves as the spine of the film, evolves, there are numerous stops made in order to collect money and do business - but as the story unfolds, evidence soon emerges that there is another and much more sinister reason for this particular journey that even Sheeran himself is not fully aware of until much later in the game. As the car progresses towards its final destination, we flashback over the previous thirty which explains how Frank ended up in that car. After returning home from the war, while working as a meat truck driver, he happened to make the chance acquaintance of Russell over a dodgy engine in his vehicle. Before long, he is dropping off huge sides of prime beef with an associate of Russell’s, Felix “Skinny Razor” DiTullio (Bobby Cannavale), and when he gets busted at work, Russell’s brother, union lawyer Bill Bufalino (Ray Romano), manages to get him off scot-free, despite his obvious guilt.

From there, Frank does small jobs for Russell, who has taken to him like another brother, and all seems well until a fellow mobster ‘Whispers’ [“The other Whispers”) asks him to blow up a laundromat which is cutting into the business of one he owns. It turns out that Russell and the Italians own a piece of the threatened endeavour, and while it is quickly understood that Frank had no knowledge of this, it is made clear to him by mob kingpin Angelo Bruno (Harvey Keitel) that the only way for him to truly make things right is to take out Whispers himself. Having killed a number of people during the war, this is not necessarily a problem for Frank and in fact, he demonstrates a certain expertise that ends up serving him well. Due to his friendship with Russell and his ability to ‘execute’ orders, Frank rises in importance in the world of organised crime. To his wife, daughters and everyone else, he appears to be a decent family man and successful union official. In reality, he finds himself being entrusted with a wide number of jobs for his real bosses, ranging from contract killings to helping arrange a weapons shipment to a group that will utilise them for the ill-fated Bay of Pigs invasion of 1961. Things really change for him however, when he meets Hoffa, then at the height of his considerable powers, and ends up working alongside him as a conduit between the forces of organised crime and organised labour. Hoffa genuinely wants to help his fellow Teamsters but the allure of power and money—specifically the Teamsters pension fund—proves to be too much to resist, and he is eventually sent to prison, a stretch that only serves to further enhance the mutual hatred between him and fellow inmate/New Jersey crime boss Anthony “Tony Pro” Provenzano (Stephen Graham). When Hoffa is released from jail, he attempts to regain control of the union from his former number two, Frank “Fitz” Fitzsimmons (Gary Basaraba), who is even more indebted to the mob than Hoffa ever was. Hoffa’s quixotic attempts to regain his power and stature are doomed from the start and seem likely to cause the end of his life if he continues to pursue them - whilst ruffling everyone’s feathers. Needless to say, he persists and this is where Frank realises what the ultimate purpose actually is, of the long and winding road trip.

Scorsese has utilised the latest in CGI technology to “de-age” his leading actors so that they can play both the younger and older iterations of their characters without having to resort to the usual solutions of additional actors or multiple layers of makeup. This de-ageing effect evidently ate up a good chunk of a budget rumoured to be at least $160 million, and while the process is not entirely perfect—the younger the iteration, the less convincing the result—it has been handled with enough care so that it doesn’t distract too much from the proceedings. However, what really keeps people from being pulled out of the story by the CGI tweaks is the power of the performances behind the trickery. It is no secret that De Niro and Pacino, for example, have done some damage to their professional reputations with any number of chronic performances in sub-standard projects far beneath their skill sets, but their work here stands alongside the best things that they have ever done. De Niro gives a wonderfully quiet and understated performance as a man whose great tragedy is not so much the things that he has done throughout his life, as it is his inability to be honest with himself about those acts, in a way that might offer him some kind of closure and redemption, instead of the hell of isolation that makes up his final days. Pacino has the flashier role—the notion of an understated portrayal of Jimmy Hoffa is too bewildering to even contemplate—and has a lot of fun chewing the scenery in his broader moments - but he is just as effective in the quieter and more reflective sections he has from time to time. And yet, as great as the two of them are, both separately and together, the truly memorable performance in the film comes from Joe Pesci in his first major performance in nearly a decade. Pesci, of course, won an Oscar working with Scorsese and De Niro as livewire gangster Tommy DeVito in Goodfellas but anyone expecting more of his hot-headed antics will be shocked here, with his polar opposite turn as Bufalino. This is a character who never raises his voice or gets overtly angry or violent at anyone, so when the time comes when he matter-of-factly informs Frank of what is to be done with Hoffa, it has a brutal finality to it that is absolutely chilling.

Another much talked-about aspect of the film has been its 209 minute running time, a notion that has sent some into a frantic complaint about being unable to go three and a half hours hours without a toilet break. This argument is patently idiotic— as the time issue proves to be a non-starter, as from the initial frames, Scorsese captures the attention of the audience with his consummate filmmaking skill, and holds it until the very end, without ever losing it for a second. The Irishman is more stately and less overtly flashy than Goodfellas, and is exceptional because of it. Blending together dark humour, brutal violence, documentary-like realism, a dazzling formal approach and a keen ear for the rhythms of both the dialogue and the soundtrack, this is Scorsese firing on all cylinders with the skills of a veteran at the top of his game - with the energy and enthusiasm of someone just starting out and eager to prove what they can do. With peerless input from his triple Oscar-winning 80 year-old master editor, the sublime Thelma Schoonmaker, the results are never less than utterly compelling throughout - and indeed quite often better than that, with the last hour or so revealing itself to be one of the greatest extended stretches of virtuoso filmmaking in the entire Scorsese oeuvre.