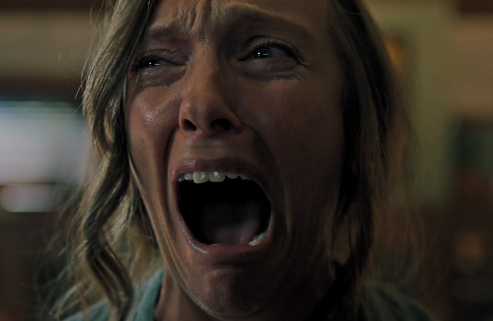 In 2011 Ari Aster debuted with a short film The Strange Thing About the Johnsons and it became a minor internet sensation due to its controversial subject matter - a darkly comic study of an African-American family where the son sexually abuses his father.  A handful of shorts later, and along comes his debut feature Hereditary  - arriving with a huge fanfare and many declaring it one of the scariest films ever made. However, Hereditary feels like nothing more than a provocation and offers no substantial allegory to make it feel especially deep. Aster is clearly a technically precise filmmaker, and on that level, this is one of the most accomplished debuts of recent memory. He has garnered excellent performances from his entire ensemble with the cast integrated perfectly into the oppressive atmosphere. But this is a film that’s all atmosphere, with the broad themes of marriage, parenthood and religion all thrown in with very little, if anything, to say about any of them.

Collette is Annie, an minituarist artist who has suffered the recent loss of her mother following a long battle with cancer. She openly admits to not being able to process the news properly  — at one point, she even asks her husband Steve (Gabriel Byrne) whether she should be sadder. The pair live with their two children, stonehead Peter (Alex Wolff) and Charlie (Milly Shapiro), their 12 year-old daughter with an unspecified disability. A few days later, Steve receives an unexpected call that Annie’s mother’s grave has been desecrated and Charlie begins to act with increasing strangeness  — frequently wandering off into the garden following some mysterious presence, in spite of her ongoingly shy reserve. Elsewhere, after returning to a group therapy grief counselling class she initially attended after her mother passed away, Annie meets the friendly Joan (Ann Dowd), who leads her to a new stage in the grieving process that has drastic consequences for the mental and physical well-being of the entire family unit.

Hereditary’s tonal inconsistency and lack of thematic depth stops it from ever being truly scary  — but that isn’t to say it doesn’t impress in many other departments. Aster has a precise command of the film’s visuals, with a meticulous production design. In the film’s best moments, he uses small details in the film’s design to foreshadow later plot points, from a diary in the daughter’s bedroom to a lingering shot of a letter about spirituality being forced through a letterbox. His style is also far removed from the stylistic hallmarks of jump-scare horror. He prefers to linger on a long take, soaking up the reaction of his actors in extreme close-up, a method which proves to be more unsettling than any of the directly supernatural elements. It could be argued that the film is a twisted satire of a bourgeois family in crisis, but again, it doesn’t really hold that thematic weight - the family’s large house seems to have been designed purely for its unsettling visual qualities, more than to signify anything deeper about the family itself. By the time we get to the third act, the film is held together entirely by Aster’s command of the camera and the strength of the central performances, because the story becomes increasingly tonally inconsistent. The oppressive atmosphere of the earlier stages is suddenly exchanged for an unexpected dose of camp that undermines everything that came before it.

Anybody going to see Hereditary by falling for the marketing blurb “The Exorcist for a new generation” will be left scratching their heads, as this slow burning psychological thriller becomes unashamedly odd. The tight command of tone is significantly loosened at the conclusion where a scrambled session of ill-explained symbolism attempts – and fails - to wrap things up. Hereditary is tonally messy, but the hallmarks of a fine director are certainly shown here.

Gary Ross’ extension/sideways take on Steven Soderbergh’s wildly successful and flamboyant Oceans Trilogy is flatly directed and unimaginatively edited – and although it certainly has glamour, it offers a plot that strains to appear ingenious and surprising. It is much less clever than it hopes to be, the humour is forced and smug, and it is nowhere near the classic female heist classic it clearly aspires to be. If the remake of Ghostbusters should have taught Hollywood anything, it was that in making a feminine-centred version of an old hit - it is  simply not enough to assemble a group of extremely talented women. What is needed is a good script and skilful direction. Ocean’s 8, unfortunately has neither. The instigator of the larcenous plot is Debbie Ocean (Sandra Bullock) whose facial transformation into Michael Jackson becomes eerier with every glimpse. As the sister of the supposedly deceased Danny, (played by George Clooney in the male franchise), she is up for parole after serving time for a heist actually committed by her then-boyfriend Claude Becker (Richard Armitage). She talks her way out of prison with contrite words about going straight - then niftily scams her way into a room at a posh hotel, scooping up some free items at a high class store on the way. Then she hooks up with her old partner in crime Lou (Cate Blanchett) to enlist her in a big score she’s been planning during her years inside: the theft of a $150,000,000 diamond necklace kept in the Cartier vault. To pull off the heist, the two enlist the services of an idiosyncratic crew: Amita (Mindy Kaling), a gem expert; Tammy (Sarah Paulson), an experienced big-time fence turned suburban mother; Constance (Awkwafina), a sleight-of-hand expert; and Nine Ball (Rihanna), a brilliant computer hacker. But the key to the plot is Rose Weil (Helena Bonham Carter), a goofy has-been fashion designer whom Debbie wins over by arranging for her to make the dress to be worn at the Metropolitan Museum’s star-studded gala by the affair’s prima donna celebrity hostess Daphne Kluger (Anne Hathaway). Weil is tasked with insisting that the only accessory that will go with the gown is the Cartier necklace, and once it is at the event, the team will engage in complicated manoeuvres to relieve Kluger of the piece and sneak it past the heavy security, substituting a zircon replica in its place. As a bonus, Debbie arranges that Daphne’s date for the evening will be none other than Becker, whom she intends to frame as the fall guy this time around. Of course, things don’t go precisely as planned as the scheme works itself out, and a degree of improvisation is required along the way.

The one thing the film has in abundance is glitz, thanks to that Met setting (and some of the other New York locations) plus the production/costume design, set decoration and cinematography all add lushness to the images. When it gets to the actual heist mechanics, however, matters are much less rosy. The plan is complicated, based less on skill than technology and drugs, whether that be a computer program that duplicates the necklace from afar or a food additive that causes massive vomiting. As for the hiccups that happen when the plan is put in motion, they’re handled ridiculously easily. One last-minute hitch is resolved by a quick phone call by Nine Ball to her sister, who also just happens to be a genius. That’s not so much a case of cleverness as lazy screenwriting. Nor do Ross and Milch manage to give their characters a lot of character, and as a result most of the cast are not shown at their best. Bullock meanders through the film with a brittle smile and although she certainly wears her elegant wardrobe with aplomb, she brings little charm to the proceedings, apart from her opening parole-hearing scene. Blanchett fares even worse. Her demeanour conveys the look of an actress deep in though about another project entirely. Kaling is surprisingly nondescript, as are Paulson and Rihanna, while Awkwafina is used for one-note comic relief. Bonham Carter is good value though with her pose of befuddlement – as is Hathaway who goes all out as the dim diva. Armitage is rubbish as Bullock’s unchivalrous ex, and the ubiquitous James Corden shows up to scrape some laughs as a frazzled insurance investigator. As a result of the aforementioned, Oceans Eight is at most a mildly engaging romp, but nowhere near the class, style, verve and wit of 11, 12 and 13.