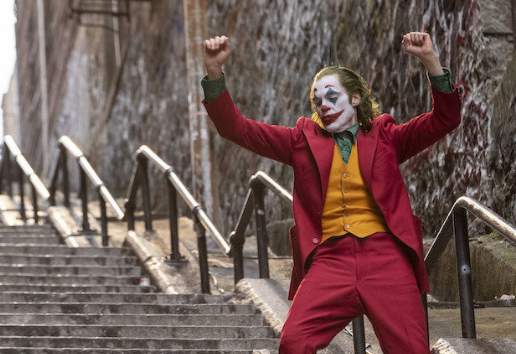 Joker is a dark, psychologically complex study of a man driven to the brink of madness and beyond - a story about a frustrated, alienated individual who turns to violence. Arthur Fleck (Joaquin Phoenix) is an isolated loner in an uncaring world, a victim of social neglect whose route towards an odious outcome is all but pre-ordained. The film offers homages to Martin Scorsese’s The King of Comedy with Robert De Niro riffing on the late-night host Jerry Lewis played in that picture and it takes place against the same backdrop. Gotham City shows cinema posters and marquees firmly placing the year as 1981, and Joker echoes that period’s depiction of the city as a cesspool of depravity and filth. The opening scene shows Arthur, who’s peacefully but unhappily twirling a closing-down sign for a discount store, being first taunted and then beaten by a gang of thugs. Phoenix, who reportedly lost almost four stone (over 50 pounds) for the role, makes Arthur so fragile he’s painful to look at, especially when we see his bare back, it’s as if his bones are about to tear through his skin. Even within the world of Joker, Arthur is as much a symbol as a man. When heading home on the subway, still wearing the clown costume from his day job, he is attacked by a group of drunken stockbrokers who’ve mistaken him for an easy target - and he ferociously fights back, killing the entire group, thus becoming an anonymous folk hero, spawning a surge of resentment against the privileged elite. The assailants worked for Thomas Wayne, a wealthy right-wing businessman who’s running for mayor on a law-and-order platform – and of course father of the Joker’s eventual nemesis Batman. Arthur believes, at the very least, in his right to be listened to, whether it’s by his therapists, his ailing mother (Frances Conroy), or his next-door neighbour, a single mother played by Zazie Beetz.

Joker is a two-dimensional figure who’s more powerful, and more frightening, for his inherent indecipherability. He is clearly mentally ill, his illness worsened by a lack of community or social safety net. He’s not an inevitable product of a sick society, but a healthier one could have stopped him from developing into what he became. The film’s apparent aim is to offer Arthur empathy without sympathy, to understand him without excusing him. Phoenix’s performance is magnetic, but magnets can repel as well as attract, or sometimes just hold us at a distance. Despite the inevitable hints about the emergence of the Joker’s future adversary, the film is presented as a stand-alone piece. But its third act owes much to The Dark Knight Rises’ tale of a city on the brink of anarchy, even as this super-villain’s role in pushing it over the edge is mostly accidental. Arthur, who’s been so starved of attention for so long, becomes an inadvertent celebrity, going the early-1980s equivalent of viral, and he likes how it feels. As Gotham starts to smoulder, Joker becomes a sobering, unsettling account of what happens when those antisocial impulses, no matter their origins, are left unchecked—either through ignorance or indifference. Joker’s true sympathies lie not with Arthur, but with the anger he comes to represent, the sense of disenfranchisement and betrayal, of feeling like the world is ruled by indifference and the best thing to fight it with is hate. That’s real, and nowadays it sometimes feels so prescient that it almost takes on human form. Joker just gives it a name.

Sorry We Missed You 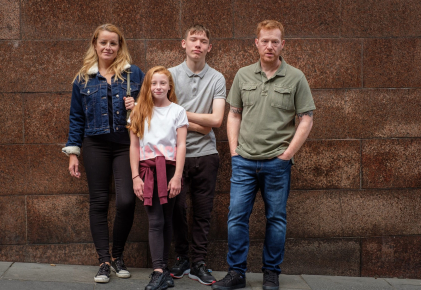 When struggling Ricky (Kris Hitchen) tells his wife he’s about to make a £1000 down payment on a delivery van, we know he’s about to face a great deal of  trouble.  His son, Seb (Rhys Stone), asks his father of the planned van, ‘What colour?’ and then disdainfully labels him a ‘white-van-man’, it’s clear the rules of this game are being stacked heavily against Ricky, and all of his fellow drivers. His entrepreneurial hopes quickly turn into a horrific blue-collar nightmare. Seasoned social realism director Ken Loach finds time to paint a multi-dimensional portrait of a loving family, which makes it all the more devastating when it all falls apart.

Ricky takes on this new job delivering packages, but he’s not technically an ‘employee.’ His contractor status, which the foreman Maloney (a terrifyingly authentic turn by Ross Brewster) pitches to him as ‘being his own boss’ is not in any way accurate. The logistics company that oversees the operation is taking advantage of diabolical labour laws. Ricky’s wife Abbie (beautifully played by Debbie Honeywood) also works long days. She tends to the elderly and the disabled, and now must take the bus after selling her car to afford the down payment on the delivery van. She’s the heart of the film, and Loach does an outstanding job packing her with emotional resonance—such as in the scene where she breaks down crying while one of her elderly clients brushes her hair. They have a daughter, Lisa (an excellent Katie Proctor), who serves as another bright spot. A day on the job with Dad delivering packages and earning extra tips is one of the film’s happy moments, of which there are several. Loach also affirms that Indian takeaway is one of life’s transcendent pleasures.

But difficulties and bad fortune abound, overriding any sense of progress. The narrative arc of the story feels more like quicksand. When Ricky attempts to secure a day off to deal with his rebellious teenage son, Maloney gives him a sermon about how he uses workers’ constant complaints as fuel to build a ‘protective shield’ around his depot. A more stirring speech happens later when the policeman who arrests Seb for shoplifting attempts to get through to the boy by pointing out his father’s love and dedication. It’s hugely telling that Ricky’s work ethic dedication to his appallingly materialistic job may eventually kill him. The superb script is by Paul Laverty, who also collaborated with Loach on I, Daniel Blake and many of his other wonderful films. The cinematography is by Robbie Ryan, another frequent collaborator. Casting mainly unknown actors helps to achieve the realism Loach is aiming for, as it may have been harder to believe a famous celebrity in a losing battle with capitalist society. The outstanding casting by the ever-reliable Kahleen Crawford must also be commended. It’s safe to say you will never look at a delivery person in the same way after seeing Sorry We Missed You. Loach’s films are empathy-vehicles, and many will feel fortunate but guilty to take the ride from a seat of privilege. The ending is a fitting climax as we’re all dutifully reminded of the simple truth that some people don’t have the luxury of a day off.