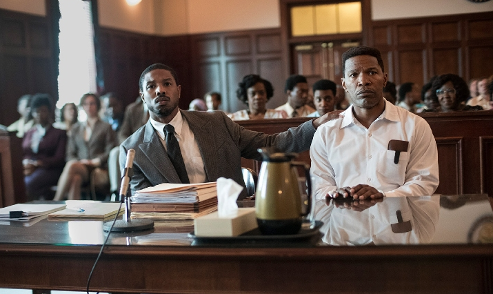 As directed by Destin Daniel Cretton, Just Mercy focusses on Stevenson’s legal beginnings, on the first seemingly impossible case he took on. But though it features Michael B. Jordan as the man himself, the film is not simply about bringing a hero to life. Rather, the film is at its most convincing when doing something more difficult: allowing us, emotionally, to feel the extent of the crisis Stevenson has made his life’s work. Co-written by Cretton and Andrew Lanham  and based on Stevenson’s memoir, Just Mercy calmly presents a world where entrenched racism, suffocating intimidation and an all but closed legal system stack the deck, to a terrifying extent, against impoverished defendants of colour. It is not for nothing that one of Stevenson’s most quoted remarks is that “the opposite of poverty is not wealth. The opposite of poverty is justice.”

A powerful asset in making these points is the film’s impressive group of supporting players. Especially effective is the group of actors (Jamie Foxx, Tim Blake Nelson, Rob Morgan, Darrell Britt-Gibson, J. Alphonse Nicholson and O’Shea Jackson, among others) who portray individuals whose lives have been mangled beyond recognition by being trapped in the machine. Introduced first is Walter “Johnny D.” McMillian, a pulpwood worker strongly portrayed by by Foxx who has already earned a Screen Actors Guild Award nomination for his work, initially almost unrecognisable behind a thick moustache. Almost as soon as we meet McMillian in 1987, we watch as he’s arrested in Alabama’s Monroe County by Sheriff Tom Tate (Michael Harding) on charges of murdering an 18-year-old white woman in Monroeville, which happens to be the hometown of Harper Lee, who wrote To Kill a Mockingbird. Though there is a brief prologue of Stevenson as a student, he’s introduced more fully as a recent Harvard Law graduate who gives his family a surprise when he turns down more lucrative positions to go to Montgomery, Alabama and fight for people who need help the most — death row inmates. Though he has the assistance of local activist Eva Ansley (Brie Larson), Stevenson doesn’t initially understand what he’s up against with the local power structure.

A visit to Holman prison and its death row, where he endures a humiliating strip search, and a stonewalling conversation he has with the seemingly affable district attorney, Tommy Champan (a brilliant turn from Rafe Spall), begin a process of education for both Stevenson and the audience. Though Just Mercy spends time with several of the death row inmates Stevenson has represented, most of its focus is on McMillian, and the film truly comes alive when the two men meet. Foxx, throwing himself into the character, explosively expresses a total lack of confidence in, and near contempt for, this young attorney. “What you going to do different?” he all but sneers after listing the failures of the lawyers who represented him in the past. “All they going to do is eat you alive and spit you out.” McMillian, as it turns out, is not the first person to underestimate Stevenson’s grit, ferocious perseverance and passion for justice. Not one for grandstanding, he simply refuses to be discouraged or even consider backing down. Stevenson eventually realises that all roads in the McMillian case lead to Ralph Myers, a white career criminal whose questionable testimony was valued more by the jury than the numerous African-American alibi witnesses the defence produced. Myers is played with compelling eccentricity by Tim Blake Nelson as he offer Myers’ shifty, twitchy, damaged personality that holds us completely - and his interactions with Stevenson provide some of the film’s high points. Another strength of the film is its refusal to tiptoe around what it took to make McMillian the first man ever freed from Alabama’s death row — a long, tortuous and difficult process despite compelling evidence of his innocence. The film portrays the ferocious resistance of some people to the possibility that this man had nothing to do with the crime. And that’s when Just Mercy is at its best. 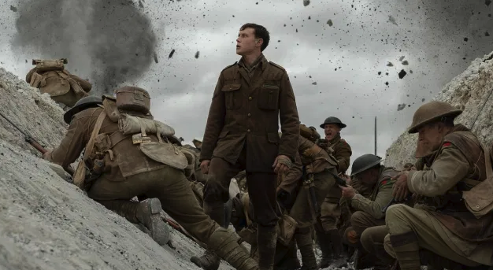 Sam Mendes’ 1917 is a gripping soldier’s-eye-view of The Great War as viewed from the trenches of France. Mendes has cooked up an immersive, heroic tale that humanises a conflict canonised for its faceless slaughter and waste, a lost generation grimly depleted on the Fields of Flanders. The story could not be simpler — two British soldiers (nicknamed “Tommies”) are sent across nine miles of No Man’s Land and enemy occupied territory to halt an attack that will only get their fellow soldiers slaughtered. The attack’s taking place next day, so Lance Corporal Black (Dean-Charles Chapman) is determined to save the “Second Devons” (Devonshire Regiment), at least partly because his own brother is a lieutenant serving with them. The general (Colin Firth) picked him for this mission because he’s good with maps, and he’ll be extra motivated. Lance Corporal Schofield (George MacKay) was just unlucky enough to be Blake’s chum, the one he picked to accompany him. Thus begins a grim odyssey through the World War I experience — the green flowering of spring unfolding under the rotting corpses of men, horses and dogs beset by the flies of April. Mud and snipers, a wrecked tank, miles upon miles of barbed wire, ruined towns, the fascinating over-engineering of German trenches (abandoned in a planned withdrawal), booby-traps, dogfighting biplanes rat-a-tatting above — Blake and Schofield are solitary souls on a quest in the middle of the maelstrom of war.

The camera clings to these two as they stumble and grope, under overcast skies or in the dark of dugouts and tunnels, through the quiet hell of a battlefield half-abandoned but sure to be full of sound and fury again, any minute now. Mendes uses the long take, a nearly seamless series of scenes unfolding in (for the most part) real time to build suspense and empathy for our two over-matched heroes. Because this script is hell-bent on throwing every peril The Great War was infamous for at them over the course of two hours. Mendes and his co-writer hurl the duo into corpse-covered shell-craters and spooky tunnels. Death comes from afar — artillery and snipers — and very close. Rifles and bayonets and bare hands are what it takes to stay alive. Death comes from above — airplanes — and below, a raging river. Of course there’s a mademoiselle in distress (Claire Duburcq) to be stumbled over, amid the cream of British character actors who play sergeants and commissioned officers (Benedict Cumberbatch, Daniel Mays, Adrian Scarborough, Mark Strong) who pass by. Of course the foreshadowing is obvious, but not heavy-handed. It’s meant to be immersive, a “Dunkirk” of the first World War. And if it isn’t on a par with that modern classic, you can blame the slack pacing, the heaping helpings of melodrama in the tale Mendes and Krysty Wilson-Cairns have cooked up. All these obstacles to overcome, and yet so many longueurs — pauses while the soldiers on this desperate, dangerous time-sensitive mission stop to shake their heads at the waste or consider the Last Milk Cow on the Western Front. Our heroes listen to a soldier singing “When I Cross Over Jordan” and take time to recite a poem — Edward Lear’s “The Jumbles” (“In a Sieve they went to sea; In spite of all their friends could say…”).

Mendes gets the blasted landscape of No Man’s Land, the trenches, the kit each soldier carries with him exactly right. The rapidly shifting shadows created by a descending flare make for a striking scene. But he fritters away some of the tension and the drive of the narrative when he loses the crouching/ducking fear and paranoia that had to become instinct if you were to have any hope of surviving the war. The long take has long been enshrined as a sort of cinematic rite of passage, something filmmakers indulge in mainly, one suspects, to impress the faithful — hardcore film buffs. Orson Welles had a hand in elevating these long unedited shots that rely on camera blocking, staging, pre-planning and actors who can remember a lot of choreography to go with their lines. Touch of Evil opens with the most famous “long take” in cinema history. Properly applied, long stretches without a perspective-changing interruption (edit) can build tension, when you’re not distracted and impressed by how many characters and how much ground Robert Altman’s opening to The Player has squeezed in. We are conditioned to cuts, and the mind misses them when they’re not there. Suspense builds as we expect something momentous coming at the end of the build-up a long take entails. Hitchcock took this to its logical extreme with Rope, a 1948 thriller whose stagebound origins allowed him to indulge in making a film of ten long takes — with only the limitations of a reel of celluloid loaded into the camera determining how many edits the picture would have. But Hitchcock admitted that Rope was just a stunt. Editing is the essence of cinema, “the lynchpin of worthwhile filmmaking,” as he put it. Cuts quicken the pace and raise the heart-rate, refocus our attention, zooming in, heightening suspense and connecting us with the characters with emotional close-ups. 1917 is still entertaining, a polished period piece and solid combat film, even if its story leans entirely too heavily on the hoary conventions of the Victorian/Edwardian melodramas that every Briton fighting in it would have recognised, way back then.