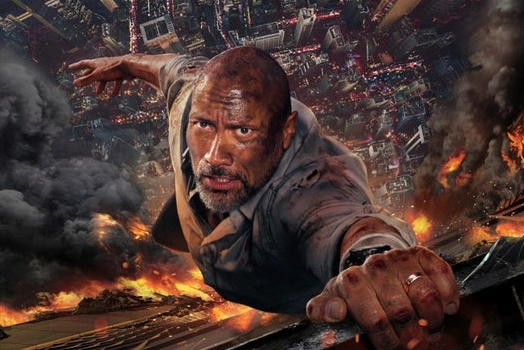 Halfway through Skyscraper, the residents of Hong Kong divert their jaw-dropping collective gaze at the spectacle of the world’s tallest structure - which is engulfed in flames - to have a look at the macho individual defying all laws of physics as he climbs in, out, and all around the building. Ridiculously, no credible explanation is given for how these people are able to pick out one man from miles away. Despite being cast opposite a 4,000-foot-tall glass and steel monstrosity, the film still gives Dwayne “The Rock” Johnson the opportunity to exert his human beast machismo as he clambers (with a prosthetic leg) to rescue his beloved wife and twins. Johnson plays Will Sawyer, who used to be an ace F.B.I. SWAT agent back in the USA before a botched hostage situation left a child dead and him without a leg. Now an amputee of still considerable muscular mass, Sawyer has adapted his skills into private security services in Hong Kong, to oversee the protection of “The Pearl”, a ridiculously wealthy venture capitalist’s phallic monument to himself—within which the commercial spaces, penthouses, and 30-story indoor rainforest are all powered with wind energy. Similar to the 1970s disaster outing The Towering Inferno’s Glass Tower, the Pearl is on the verge of a grand opening for residents. And much like that Irwin Allen disaster epic, flames are on the way.

This time however, the fire is set in motion by ludicrous Norwegian pyro-terrorists—and in this Die Hard-type outing, Johnson plays Paul Newman, Steve McQueen, and Bruce Willis all rolled up into one with his over-all mass greater than the trio put together. At no point though is the squillionaire who financed the Pearl’s construction ever criticised for his architectural pursuits – conversely he is regarded heroically for funding its construction with money from seven global crime syndicates, and then stealing their financial information to save his own skin. So much so, at the conclusion, a promise is made to rebuild the shattered Pearl, a triumphalist boast taken at face value, which is in sharp contrast to what Paul Newman memorably promised in The Towering Inferno’s ending: to leave the Glass Tower in ruins as a monument to all the bullshit in the world.