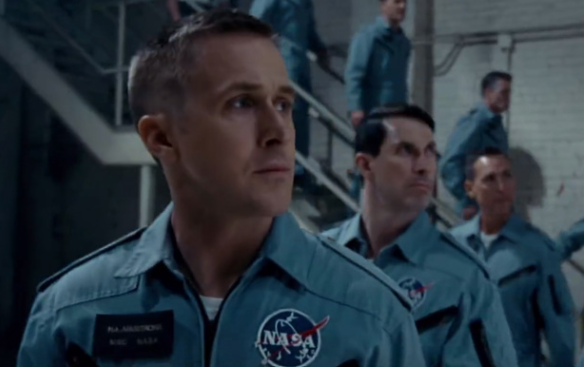 First Man opens in the early 1960s, with Neil Armstrong (Ryan Gosling) working as an experimental test pilot, flying the rocket-powered X-15 to the upper reaches of the Earth’s atmosphere. In the harrowing sequence, Armstrong is unable to descend, bouncing off the atmosphere until it seems like he’s in danger of floating off into space entirely. He’s able to resolve the situation, however, and lands safely. Back on terra firma, Armstrong and his wife Janet (Claire Foy) are worried about their young daughter Karen who is suffering from a brain tumour. She eventually passes away, and in the hopes of making a fresh start, Armstrong applies and is accepted into NASA’s Gemini programme. The film then follows Armstrong’s experience within the project, from his training and the early Gemini missions to the Apollo programme and the ultimate mission of allowing a man to walk on the the Moon. The film is painstakingly detailed in covering all aspects of the NASA missions, but just as much time is spent on documenting Armstrong’s family and the emotional fallout over the years. When team member and friend Elliot See (Patrick Fugit) is killed in a plane crash, Armstrong becomes withdrawn and non-communicative. When three astronauts, including Ed White (Jason Clarke) and Gus Grissom (Shea Whigham), are killed in a fire during a test for the Apollo 1 mission, Janet becomes even more alarmed about the human cost of the excercise — something that Armstrong, still unable to grapple with losing his daughter, almost refuses to acknowledge. The tensions come to a head as Armstrong prepares for Apollo 11, the mission that will eventually land him on the Moon.

Director Damien Chazelle has made an impeccably crafted film - finely detailed and shot through with danger and menace to such a degree that it often feels like this is the first time the realities of the American 1960s space programme have been accurately portrayed. The opening X-15 flights kick things off. It isn’t some hotshot bit of piloting designed to impress the audience with the lead character’s skills; Armstrong almost dies in the first few minutes, and his situation doesn’t get any safer from there. Chazelle and his collaborators are intent on conveying the risk in space exploration in a way that feels immediate and real. Part of it is the events they choose to highlight: more things in First Man go wrong than right. But it’s also the way the film dwells on the ramifications of those failures, like the way Armstrong has to rush out of a friend’s funeral reception because he simply can’t cope. Then there’s the cinematic execution of the space sequences. It never feels like Armstrong and the other astronauts are riding around in state-of-the-art spacecraft that are impervious to harm. These vehicles groan and creak and shudder in unsettling ways. The simplest things go wrong at the most inopportune times. Spaceflight, First Man emphasises, is messy and dangerous, and assuming that humanity has mastered any of it is the height of arrogance.

But as detailed and thought-out as the visual presentation and mission sequences are, at times, it does feel like the lead character isn’t fully realised. It’s not entirely down to Gosling’s performance; he’s empathetic and watchable in the role, playing Armstrong as a man who dislikes ego and the spotlight and would rather sit down, focus, and do the work necessary to get the job done rather than talk about it. The emotion of the character is where the film falls short. The death of Armstrong’s daughter is presented as an inciting incident that encourages him to join the space programme, and he ultimately does have a moment of catharsis before the film is over. But Armstrong’s nature makes the story frustrating at times: he’s so stoic and reserved that it can be hard for the audience to engage with him. The space sequences and supporting cast are more than enough to carry it but this film is clearly presented as Armstrong’s story. The fact that his emotional journey doesn’t feel fully articulated does hinder the film — especially since the entire point of the story is the human cost of space exploration. It leaves the viewer with the feeling of watching an incredible historical document but perhaps not a perfectly engaging narrative.