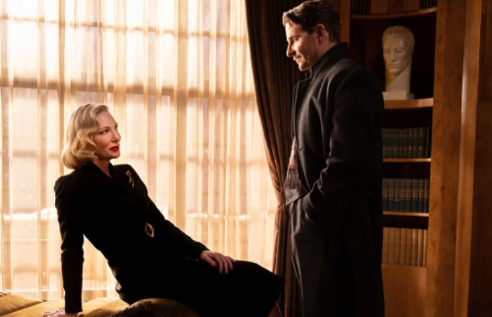 Despite the prevailing darkness and pessimism, Guillermo del Toro’s adaptation of William Lindsay Gresham’s novel Nightmare Alley is an enthralling filmed entertainment, and grim as it often is, it’s been put together with such obvious love and devotion that its energy carries us through. It’s a moralistic tale of a con artist — Bradley Cooper as Stanton Carlisle — whose imposture may or may not withstand the harsh reality that there will always be someone more shrewd, more ruthless and more powerful than he is. Del Toro and co-writer Kim Morgan streamline the narrative and retain Gresham’s bleak ending while importing a superb final line from the 1947 film version. Stanton arrives at a carnival in 1939 and learns the ropes. He picks up how to do “cold readings” as a self-proclaimed psychic, in addition to understanding how an unscrupulous barker (Willem Dafoe in a brief but vivid turn) creates a “geek” — an attraction based on a down-and-out drunk’s desperate willingness to do disgusting things in exchange for booze. Stanton falls in love with Molly (Rooney Mara), who does tricks with electricity, and they leave the carnival to strike out on their own scams. The tone dips when Cooper leaves the seamy, intriguing milieu of strongmen and freaks in the company of Rooney Mara, who unfortunately remains quite a dull presence throughout. Despite this, the film is still beautiful, with marvellous cinematography and richly crafted production design to keep viewers happily engaged.

Stanton and Molly do their psychic act for rich suckers. A canny psychiatrist, Dr. Lilith Ritter (Cate Blanchett), pegs Stanton as a conman the minute she lays eyes on him, but is nevertheless drawn to his confidence and technique. Del Toro stalwart Richard Jenkins then enters the frame as the richest sucker of them all, who is led to believe Stanton can put him in spiritual contact with a past lover. Jenkins, as he did in The Shape of Water, grounds a del Toro film in bitter humanity, though he’s playing much more of a scoundrel this time. Ultimately, nobody in this story is an innocent. The higher up you go, the more corrupt people you find. The picture of a pre-WWII America gouged by financial ruin and despair is deftly painted. Bradley Cooper, who spends a lot of his screen time with Rooney Mara thus chucking his charisma into a vacuum, comes alive when he can play with Jenkins, or, for that matter, with Toni Collette or David Strathairn or Ron Perlman.

Throughout the film, del Toro really only has time to concentrate on Stanton, even with a 150-minute length. Del Toro’s approach seems a little deflated when the story has to leave the carnival and go to swanky wartime Chicago, so he reaches out for Cate Blanchett, who puts in another suave Old Hollywood performance. Lilith, true to her name, is like a fancy vampire drawn to a different kind of parasite. Nightmare Alley is the real thing, physically imposing (it’s always raining or snowing outside the windows; objects have an almost pensive solidity and heft) and psychologically sound. Laid bare, the story casts the world as capitalism in microcosm, with misfits straining hard to make a few bob. The carnival acts, even the geek, are not portrayed as ghoulish or shameful — del Toro is too good-natured for that. Stanton is quite willing to take their pain and their money off their hands, either as a slick psychic or as a cautionary figure. 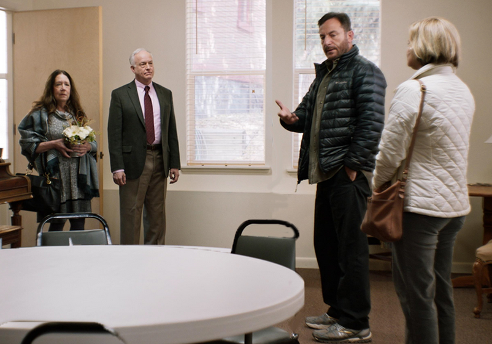 In a small, sparsely appointed Episcopalian church hall, two couples gather very awkwardly and begin making small talk. The overall mood is wary and extremely tense as they sit at a distance close to a circular table - and in the conversation that ensues, the point of their encounter becomes horrifically clear. Mass marks the writer/director debut of actor Fran Kranz, who brings a gentle and tasteful handling to a subject that could be easily ruined by melodrama and opportunism. It transpires that Gail and Jay (Martha Plimpton and Jason Isaacs) have agreed to meet with Linda and Richard (Ann Dowd and Reed Birney) to discuss a gun massacre within a school that transpired six years earlier. Each couple lost a son in the tragedy, and all are being haunted, in some way, by denial, guilt, rage and desperately unresolved grief. A further precise description of the narrative wouldn’t really do the film justice, for as the confrontation plays out in real time, we become acutely aware of the distinct and opposed perspectives of the participants. Gail is a spiky combination of simmering anger and raw pain and appears to be the polar opposite of Linda, who has clearly encountered coping mechanisms for healing and understanding. Jay on the other hand has processed his loss by throwing himself into activism, which measures up to the stiff conventionality of Richard. Eventually these contradictory characters begin to shed their defensive layers.

What makes Mass such an absorbing and extremely moving film is the way Kranz constantly goes deeper, his spare, unadorned visual language allowing words and behaviour to show emotion via four extraordinarily brave and superb acting performances. Mass certainly resembles a theatre production in its style and structure, but this is where cinema succeeds over stage by using the tight focus of the lens to intensely tear into peoples’ most tender psyches with a carefully calibrated mix of ruthlessness and compassion. With the help of his outstanding ensemble — each of whom delivers a breathtaking performance in his or her own right — Kranz also punctures the misapprehension that the practice of restorative justice, which focusses on healing, accountability and meaningful restitution, is less rigorous or demanding than the traditional system of punishment and retribution. As the conversation in Mass reaches its cathartic climax, it becomes clear just how agonising it is to stay in the room. Apparently Kranz considered several titles before settling on Mass, which can be interpreted in different ways. On its surface, the film asks if forgiveness is possible in the wake of unspeakable injustice and violence but at its core, the film exerts the power of ritual at its most reflective and galvanising.