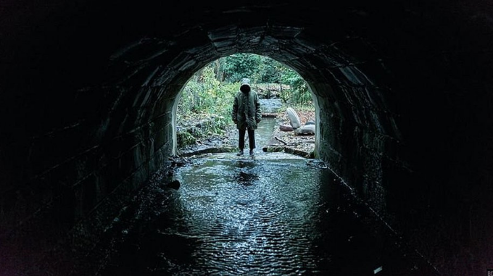 "Be careful what you believe” is the mantra of Professor Goodman (Andy Nyman) for he is a supernatural investigator with a degree of scepticism that far outweighs any empathy for those who believe in ghostly apparitions. Following his latest in an ongoing series of exposes of supernatural-affiliated charlatans, Goodman is summoned to a seaside caravan by his dying idol, Charles Cameron. However this Cameron character is no longer the man who refuses to admit the truth of a concept or proposition that is supported by the majority of scientific or historical evidence. Now he is demanding that his arrogant would-be protégé takes on the task of interviewing three individuals who managed to unravel the former TV celebrity’s disbelief. This sets the film’s wheels in motion, as Goodman’s ensuing chats introduce the trilogy of segmented spooky tales. Tony Matthews (Paul Whitehouse) is a night watchman tasked with inexplicably caretaking an abandoned hospital for previously ‘unwell women’. Needless to say, a few of these feminine spirits emerge to startle the bejasus out of hapless security guard Tony. Simon Rifkind (Alex Lawther) is a jittery young lad with multiple drawings on his bedroom walls of Satanic creatures. This obsession emanated from a late-night drive home in his parents’ car, where he struck an odd beast while returning home from a party.  Mark Priddle (Martin Freeman) is a flat-capped wax coated businessman whose wife’s horrific childbirth occurs while he’s engaged with a spectral visitor.

Unfortunately while each of the three tales alludes to creepiness, none is particularly imaginative, relying on tiresomely predictable jump scares and poltergeist imagery in a vain attempt to terrify the audience. Nyman’s performance is hammily annoying and with the other writer/director being The League of Gentleman’s Jeremy Dyson plus the supporting cast of Whitehouse, Lawther and Freeman, it would suggest the possibility of something special. Sad to report however that the sheer predictability and mundanity of the narrative reduces the concept to little more than mediocre. Without wishing to spoil anything for the viewer, the ‘Scottish’ characterisation of ‘Charles Cameron’ for example is quite appalling (if you've seen the Tina Fey vehicle Whisky Tango Foxtrot, recall the lecherous Scottish freelance photographer character Iain MacKelpie with the ludicrous cod-Glasgow accent) - so the utterly predictable revelation of who he really is comes as more of a relief than anything even remotely resembling a shock. In fact the only horrific thing about ‘Ghost Stories’ is the pile of overblown adulatory reviews shown on the promotional poster.

Lily is a polished upper-class teenager with a penchant for short shorts and impeccable accessorising. The trappings of her comfortable life are highlighted in a magnetic scene in which local drug dealer and potential hitman, Tim - played by Anton Yelchin who tragically died in 2016 and to whom the film is dedicated, drops by for a meeting of the minds. “Ave Maria” plays as he takes in the grandeur of the grounds, which require two riding lawn mowers working in alternately angled unison. An extra wide-angle lens is necessary to capture the entirety of this, which is then followed by seductive close-ups of his tattooed hand stroking the shiny curves of a classic red sports car. However, all of this has conspired to create a prison for Lily, and one of her stepfather Mark’s making. Following the death of her father, she and her mother are beneficiaries of Mark’s wealth but at the same time, are confined by its structures. He forces decisions upon them without their consent, they are spoken to, not in conversation with. Mark seems to materialise at will throughout the house, making odd blender drinks before retiring upstairs where the sound of his rowing machine can be overheard in each and every room. Amanda, Lily’s former friend, senses Lily’s hatred for Mark and offhandedly suggests they kill him. What transpires is a smart, darkly funny and surprisingly entertaining film. Amanda is shown playing online poker and oversized chess and although mere emotions do not register across her face or body, she is clearly self-possessed and transparent - always saying exactly what she means. By contrast, Lily almost never says what she means. There are countless scenes in which the camera — as unmoving as their emotions — frames every character together in the shot, and then quickly shifts the focal point and perspective pulling the background character into sharp focus and blurring the foregrounded character. It’s a brilliant cinematic touch that informs so much about how these characters perceive and relate to those around them.

Thoroughbreds expertly plays with the horror of being a teenage girl and also the fear they seem to instill in others. It’s about wealth and ownership and the value society places on objects, but is also obliquely commenting on the likelihood of every seventeen-year-old girl being a potential sociopath. Mark calls out Lily’s lack of empathy and her inability to see someone else’s point of view, but she knows what she wants – and she uses calm and chilling manipulation to achieve it. Well worth seeing.