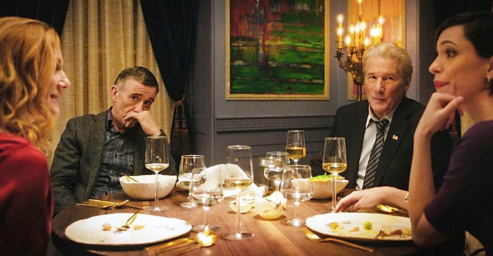 Oren Moverman is a challenging director, who prefers not to make his films easy or too palatable for audiences. As a result for many, they are at times uncomfortable to watch. With The Dinner, that discomfort fits perfectly with the subject matter. Based on the best-selling book by Dutch author Herman Koch, The Dinner is a gripping family drama that deals with mental illness, past traumas, and conflicting moralities against the backdrop of a lavish and extravagant restaurant meal.  While the plot takes place over several hours during a prolonged dinner, the story itself contains years of history. Congressman Stan Lohman (Richard Gere) invites his brother, Paul (Steve Coogan), and sister-in-law, Claire (Laura Linney), to dinner with his wife, Katelyn (Rebecca Hall), in order to discuss an urgent family dilemma. They converge upon an exquisitely appointed establishment, replete with every overtly attentive trend, and proceed to wreak emotional havoc on one another, including the maître de and the waiting staff — in fact anyone who gets close enough to the blast range.

Paul, a writer and former high school teacher, brings to the table decades of resentment for his suave politician brother, repressed trauma over his wife’s past illnesses and an out of control mood disorder. His erratic, unfiltered patter is at first endearing — his horror at the fastidious food rituals is a necessary tonic against the stuffy, pretentious preening of the restaurant. However, as the night progresses, he escalates from provocative to blatantly offensive and confrontational. What’s initially funny becomes aggressive, and Coogan masterfully balances Paul’s evolution, over the course of the evening and in flashbacks, with a rivetting dramatic performance. Through the script, which he adapted, Moverman carefully shifts our allegiances to the characters. While we’re initially aligned with Paul and Claire, we slowly come around to Stan, who represents the moral compass within this hurricane of emotion and manipulation. The flashbacks offer the context for Stan’s mistrust of Paul’s judgement together with the past conflicts and grievances with each other. Despite the outbursts, cajoling and wheedling, Stan somehow remains steadfast in his convictions, offering a North Star of righteousness.

With The Dinner and his last directorial effort, 2014's Time Out of Mind, (also featuring another excellent performance from Richard Gere), Moverman offers multiple layers of sound to create the atmosphere of the restaurant, as well as mimicking the aural overload of this experience for thew other diners. Background conversation is turned up, interfering with the main conversation; characters talk over one another, rendering their statements unintelligible. During a particularly tense climactic scene, the ding of emails piling into the inbox of an open laptop serves as an infuriating metronome-like distraction. The Dinner is at its most compelling when wrestling with the central conflict concerning the children — it’s horrifying but fascinating. While Moverman’s cinematic style may to some be physically uncomfortable to experience, it’s impossible to turn away from the quartet of excellent performances. The story is wrapped up messily but beautifully, and by the end it feels like everyone has shared a cathartic but transformative experience. 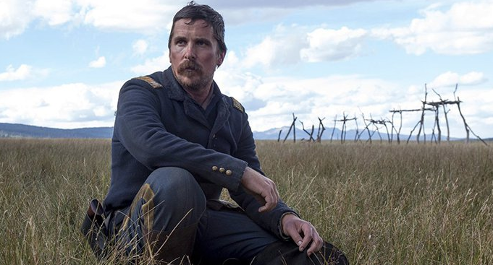 The year is 1892 and Captain Joseph J. Blocker (Christian Bale) is a celebrated army captain known for his brutal killing and capturing of Native American warriors throughout the West. At a prison in New Mexico, a very reluctant Blocker is ordered to transport an incarcerated Cheyenne chief, Yellow Hawk (Wes Studi), to his rightful home in Montana, so that he may succumb to his terminal illness in peace and with dignity. Blocker and Yellow Hawk were once rivals, having slaughtered many of one another's allies, and now find themselves in an awkward position of collaboration as they make a dangerous journey.

Hostiles is yet another example of the once-fluid genre of westerns now mired in brooding characters, smugly gruesome violence and a snails-pace narrative. There have always been literally and metaphorically dark westerns - revisionism isn't as new as contemporary filmmakers believe it to be - but the earlier films also used to celebrate various textures of community, even while acknowledging the evils of genocide and imperialism that yielded America. Hostiles only accords Blocker prominence, and he's played by Bale with the same clenched mannerisms that have defined his acting for 20 years. Bale's caged ferocity can still be unnerving, particularly when Blocker confronts a pacifist (Bill Camp), but he's still an actor who is desperately in need of a role that would allow him to abandon disconnection. At the beginning of the film, Blocker is so averse to helping Yellow Hawk that he's willing to risk a court martial. After a few skirmishes with the vicious Comanche, Blocker and Yellow Hawk exchange respectful glances, as if they don't already know of their respective formidability on the battlefield. Remarkably, Yellow Hawk evinces no bitterness about his situation as a prisoner, along with his family, of whites who invaded his land, as we're meant to identify with Blocker's resentment of Native Americans who were presumably fending off intrusion.

Director Scott Cooper must surely have been aware of the thorniness of this situation in presenting a traditional Cowboys v. Indians film that can be acceptable in the 21st century. A modern film simply cannot propagate whites killing Native Americans, but Cooper exhausts himself trying to render Hostiles as politically correct, though the film would be more convincing and vital if he'd indulged his genre-fuelled fantasies without so much equivocation. There are several scenes here in which white soldiers elaborately apologise to Native Americans for stealing their land, and, while poignant, they feel like a sop to contemporary priorities. If Cooper revered Cheyenne culture, he'd have accorded Yellow Hawk's family significantly more screen time, rather than treating Adam Beach and Q'orianka Kilcher as little more than extras. This self-consciousness could be overlooked if Hostiles was an otherwise stirring adventure, but the film moves at a funereal pace, implicitly celebrating its sluggishness as a mark of integrity.