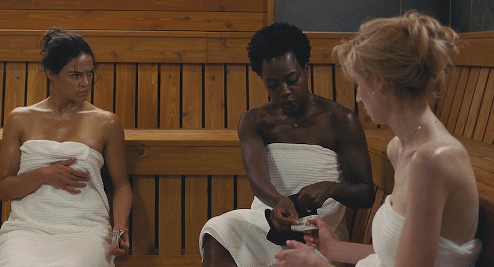 To date, Steve McQueen’s films have focused on the intimate despair of suffering. Such as 12 Years a Slave, which cast an epic lens at the dehumanising mechanics of slavery and was painfully derived from one man’s personal hell. His latest, Widows, however, showcases a directorial flair for balancing large ensembles ensnared in a plot-driven web where what unites all parties is a form of anguish. From its title, the film suggests bereavement as a focal point, and while that torment is very pronounced for Veronica, the film more largely encompasses the indignation felt by a cultural malaise from all directions. There is of course the fact that all three central women have, knowingly or not, been reduced to mere accessories by their husbands, and treated as just badly by the apathetic police and the leering Manning brothers. McQueen and co-writer Gillian Flynn’s screenplay really digs into this and lends itself well to McQueen’s signature melancholy. Veronica’s marriage to Harry is explored in half-dreams and forgotten memories of love and loss such as the almost unviewable way Harry devours Veronica’s face in a vicious kiss – which expresses a physical desperation, but it is nonetheless informed by the whims of a man who placed his values over the spouse he leaves at home. Conversely, Alice must deal with having moved from her mother’s house to her husband’s flat like any other transaction in her life. She doesn’t even bat an eyelid when her mother suggests it’s the most natural thing in the world for her daughter to consider earning a living in escort services. However, the film also builds to greater unease in more significant ways, such as in tackling the implicit challenges of a black woman married to a white man, especially if that white man is treated by everyone as a criminal and she, a relatively honest woman, is too. This is then juxtaposed to the cynicism exemplified by Farrell and Duvall’s smirking Mulligan family being every bit as opportunistic as the Mannings; they just carved out their perch generations ago. Either way, this community is doomed from whoever gets his cut.

As much liberated as he is constrained by the commercial imperatives, McQueen’s thematic considerations act as deep reservoirs inside of a conventional studio film. It does possess some excellent performances. Davis stands out as Veronica, a woman of substance and means who has willfully lived with her eyes closed. She enjoys the sterile existence of her penthouse pad, but has no illusions of where it came from or how she is viewed for her choice of husband—as well as why his being a thief might be the least of it. Davis can play a role such as this in her sleep, but she finds real fire underneath all that wind and fury, signifying a resilient and utterly compelling protagonist. Debicki however for me, steals the film as the granddaughter of Polish immigrants who never learned to drive, much less steal, yet adapts very quickly. Raised to be a trophy, she gives an outstanding performance as a woman wakening up to her ability grab the spotlight all on her own. Kaluuya will certainly change audience perceptions after his empathetic work in Get Out. His coldblooded killer here provides him with some truly chilling work.

There’s so much innate smartness in McQueen and Flynn’s fast-moving schemes that it’s a shame it becomes just a shade too self-satisfied for its own good and stumbles a bit in the third act. While the heist is always a means, as opposed to the end, the film’s finale veers into the long grass as it attempts to play the audience with several “twists” that, like Flynn’s best scripts, strain incredulity. Only in this case, it strains necessity too. Widows is loaded from top to bottom with terrific performances and a confident swagger that comes with holding all the cards up its sleeve. So there’s no real reason to attempt to pull yet another ace out at the end. 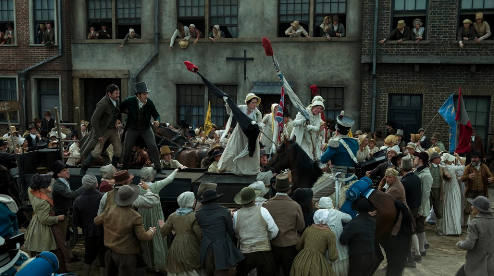 An unprovoked massacre of pro-democracy protesters in Manchester in 1819, is re-enacted here in Peterloo, Mike Leigh’s most ambitious project to date, dwarfing his previous film Mr Turner. Whilst his subject matter and good intentions are honourable, regrettably the transition to screen is worth less praise. The Peterloo massacre, to this day, as the 200th anniversary approaches, is still a subject infrequently discussed in political circles but the film falls short on several levels and is unlikely to stoke the dormant fires of debate on the tragic event.  The film recounts an early 19th century moment in working class Northern England wherein a large and peaceful protest in favour of equal parliamentary representation led to an army commanded massacre. If you were unfamiliar with this event, you’re most certainly in the majority.

The director is typically known for his gritty tales of contemporary social realism and Peterloo is still pure Leigh, showing him at his most fiery in terms of sheer political rhetoric. This is a stridently political film about oppressed workers, the starving underclasses, and the monocled fat cats with their iron grip keeping their employers and tenants under brutal control. It is mostly a film of talking with Rory Kinnear as a pioneering political speaker who struts like a narcissistic fop. Depending on your tolerance for extended conversations on the necessity of organised protests, this could prove rivetting or it will derail you into a coma. The detail is truly exhaustive but Leigh wants us to be educated by the relentless speeches, and have us understand how such rhetoric impacts different people. The film shows the many petty fights, the brutal class system and the questionable legal decisions that all helped to seal the bloody fates of the peaceful protesters. When it comes to the point where the cavalry is called in, audiences have been suitably enflamed by the blatant injustice of it all.

Leigh, working here on a much bigger budget than usual thanks to the bottomless fiscal pit that is Amazon Studios, gets truly epic in the extended massacre featuring some expertly composed camera work and nifty CGI crowd-creation. The freneticism of the scene is captured with the carnage always visible, as are the looks of sheer cowardice on the faces of the soldiers themselves. Maxine Peake and Rory Kinnear are always compelling performers, even when chewing their way through leaden, stilted, mannered and mirthless dialogue such as on offer here, as are many of the other cast members who are lumbered with expositional monologues that ultimately prove tiresome in the extreme. So, whatever its charms, there is no escaping the overall sense that Peterloo is ultimately a cumbersome misfire that mistakes scope and scale for greatness. Two centuries on, the victim ghosts of St. Peter's Field surely deserved a better memorial than this.