Based on a novel by Sarah Waters, The Little Stranger is a gothic story set in a crumbling mansion that is, perhaps, populated by a ghost, as well as by its haunted humans. Domhnall Gleeson plays Dr. Faraday, who, in 1947, makes a call to the Ayres mansion. He looks in on the sick maid, Betty (Liv Hill), and quickly discovers that she's actually quite well, but he decides to spend some time on the premises to speak with the other occupants of the mansion. He also encounters Roderick (Will Poulter) a World War I veteran badly burned and disfigured, and still battling a painful leg injury which Faraday thinks he can alleviate with a radical new treatment. He also sees this as an excuse to return to see Roderick's attractive sister, Caroline (Ruth Wilson). Director Lenny Abrahamson’s previous film, the acclaimed Academy award-winning drama Room, was a scary, taut thriller and a deep psychological drive into the experience of a woman and child held captive for years by an abuser. However, anyone expecting something similar may be disappointed with this.  The major focus is on the psychological goings-on with the doctor. His mother had been a servant in the grand house in its heyday, and a childhood visit to the house for a grand garden party instilled in him a fascination with the Ayres and a longing for the house. As Dr. Faraday becomes a part of the Ayres family’s lives, strange tensions arrive and even odder occurrences begin to unfold.

The film certainly has a fine cast also including Charlotte Rampling as the house's matriarch who finds herself locked in a room, with dire results. The film is filled with foreboding with the clear intent of leaving the viewer in suspense. There are disturbing things and creepy occurrences, however if only the film had a more focussed script and director Abrahamson had a better sense of what he wanted his film to be, it may have wavered less between ghost story, Gothic thriller and moody historic commentary on the fall of the British class system. Because it keeps hinting it is one or the others of these genres, it fails to gel around anything and leaves the audience feeling unsatisfied and somehow cheated of a promised emotional payoff. It is tense, moody and edgy throughout until it ends with no real resolution. There is death but no catharsis - secrets remain hidden and no questions are satisfyingly answered. 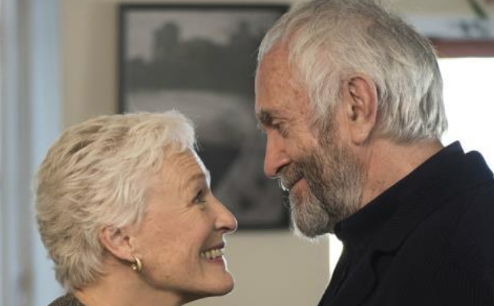 Unlike many other reviewers who have somehow fallen victim to its mysterious charms, I found this to be little more than a tortuous, standard-issue Oscar-pleading film—the kind that seems to have been crafted for the sole purpose of winning awards and featuring someone who is now turning up in increasingly blatant trophy bids in the hope of finally getting the prize. Having already tried and failed along those lines with the embarrassing Albert Nobbs, Glenn Close once again tries with this drama - The Wife, and while it is a little better than most of her work - it still reeks a little too much of desperation for its own good.

Close plays Joan, the wife of Joe Castleman (a hammy turn from the usually decent Jonathan Pryce who needs a slap from the director, of whom more later), a celebrated author who, as the film opens, has just won the Nobel Prize for literature for a body of work that has pretty much redefined the art of writing for generations to come. On the surface, Joe seems decent enough but he is one of those arse-pain personalities who cannot stand it unless the attention in any room is focused entirely on him—even when he praises Joan during a speech at a party, he spends more time talking about himself than her. Once they arrive in Oslo and reach their opulent hotel room, the cracks in their seemingly ideal marriage begin to show—a sexy photographer serves as a reminder of Joe’s lifelong aversion to marital fidelity. In flashback we see him and Joan when they first met during her time as a student when he was her married professor. His refusal to discuss the short story written by his dumbo aspiring writer son (Max Irons) confirms his incredible ego. All the pressure finally gets to Joan and she at long last forces a confrontation with Joe about a particularly devastating secret in their lives that she can no longer bear to live with.

Based on a novel by Meg Wolitzer, The Wife struggles to come to life, only to eventually collapse and die in a spasm of well-mannered embarrassment. It seems like a film tailor-made for the #MeToo era but there is little to it that would have seemed out of place in a decades-ago soap opera. The screenplay gets increasingly contrived as more unnecessary subplots (including one featuring Christian Slater as Joe’s sleazy would-be biographer who lurks around the sidelines and tries to exploit Joan’s frustration at her husband in order to get juicy titbits for his book) are heaped on to clutter a narrative that would have been perfectly fine sticking solely to Joan and Joe confronting their lives and lies. The direction by Bjorn Runge is so listless that you never get any sense that there is a human intellect guiding the material—it feels as if it was directed by an artificial intelligence system that knows how to put a film together but not how to make it work on the kind of emotional level that a story like this desperately needs to achieve in order to succeed. You always get the sense that you are being told a story and not a particularly compelling one at that—even when the big dramatic revelations finally begin to detonate, they are so anti-climactic that they barely register. The biggest problem with the film is that whenever Close is on the screen—which is most of the time—she reveals the rest of the film for the hollow and contrived nonsense that it is.