balances bitterness and sweetness to near perfection. Sam (Firth) and Tusker (Tucci) have been partners for the past twenty years, but their love is being put to the test. They’ve decided to pack up and travel across the UK with their dog, Ruby, visiting friends and sites of happy memories along the way. The reason for this trip is so that Tusker – a former bestselling novelist and amateur astronomer – can experience these moments one final time. Tusker has been diagnosed with early onset dementia, and his condition is deteriorating more rapidly than expected. Sam – a famous musician who has put his career on hold – takes care of Tusker the best he can, with an eye towards a future when his love will require even more attention. Tusker himself doesn’t see much of a future. Without the ability to write his words, Tusker feels like nothing, and he also worries that Sam might be sacrificing too much for something that seems like a foregone conclusion. Writer/

Director Harry Macqueen’s carefully worded material and direction allows his performers to make sure the silences between the characters are as potent as the dialogue. He and his cast want the viewer to take in everything that the characters are experiencing. They want people to admire the light coming between the trees at sunrise, to marvel at the enormity of a star spangled night sky, to enjoy watching cars zoom by a restaurant window along a motorway and to feel the warmth of a groggy early morning cuddle in bed. And Supernova also wants viewers to think about what these moments mean to those experiencing them, and the potentially the tragedy of not remembering what happened.

Supernova isn’t a long film, nor does it feel like one, but it does want us to savour the experience for as long as possible.

Those luxuriant moments of quiet humanity play nicely with the inherent drama that comes with the inevitable loss of a loved one. The film focusses most intensely and poignantly on romantic tension and complicated characters rather than tear-jerking misery. Supernova is a bittersweet story by any standard, but it’s one that’s never maudlin. The situation at hand feels realistic and fully formed, and never like a cinematically sanitised version of what could be a true to life tragedy for some. Firth and Tucci are a flawless pairing, capable of showing love and frustration in equal amounts. Sam seems to be dragging out their trip to spend a maximum amount of time with a still mostly coherent and alert Tusker, all while looking towards future steps for his partner’s care. While Tusker is tormented by his condition, he’s equally disheartened to see Sam’s obvious lack of self-care. Tusker wants to use what’s left of his mind to remember Sam as the man he fell in love with, not as a doting carer. Both are losing control over their carefully cultivated lives and have different thoughts on the future. Sam wants their moments together to go on forever, while Tusker just wants to live in the moment for as long as he possibly can. The chemistry between Firth and Tucci is so natural and lived in that it’s impossible to say which of the two is better. It’s practically a tandem performance, which is what a great romance should feel like. Firth and Tucci play this couple as people who know each other so intimately that they’ve moved past finishing each other’s sentences. Now they can finish each other’s thoughts with a simple glance. It spoils nothing to say that Supernova expectedly builds towards an inevitable reflection on the irreconcilable link between love and mortality, but the time with Sam and Tusker is well spent. 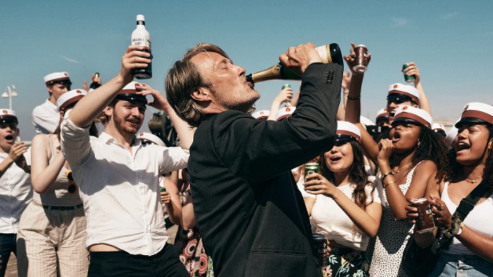 They don’t need an “experiment” to confirm what anybody of drinking age learns all too quickly — there’s tipsy, inebriated or drunk. They can see it in their students, teenagers who cut loose with a drinking-game/sprint around a local lake which invariably gets out of hand with pranks and general drunk-and-disorderly excess. But as they’re academics, four long-time friends, colleagues at a Danish high school, why not couch their research in scientific/philosophical terms? They can see one of their ranks, Martin (Mads Mikkelson) is hurting and slightly lost. The lonely gym teacher Tommy (Thomas Bo Larsen) is always down for another Tuborg. Shy and unmarried choral teacher Peter (Lars Ranthe) figures “Why not?” And then there’s the youngest member, psychology teacher Nikolaj (Magnus Millang), the father overwhelmed by the brood back home whose birthday the other three have gathered to celebrate. He sees that sad, burnt-out history teacher Martin is in dire need of an intervention. Instead, Nikolaj quotes this Norwegian psychological theorist Finn Skarderud who has the notion that humans are naturally alcohol-deprived, that our optimum BAC (blood alcohol content) is .05% off. That’s how he gets “Not tonight, I’m driving” Martin to drink with them. After all, what harm is there in Another Round? With his latest film (titled Druk in Danish), Thomas Vinterberg dips into dipsomania in its Scandinavian form. He puts four men, their relationships, their careers and their futures in a blender filled with vodka, whisky, wine, beer and absinthe and gazes in no-real-surprise at what happens. This character study is fascinating. The story centres on Martin, raising two sons with his wife Maria Bonnevie who works as a nurse at night, and thus they barely see one another. Mikkelson, as always, lets us catch the despair in his eyes. What Martin’s students notice is a teacher who has checked-out, endangering their performance in upcoming final exams that will determine their college/career options/entire futures. His friends see the signs, maybe even his eyes tearing up. But everybody gets distracted by this experiment and what they’ll discover. They each buy breathalyzers, have a drink in the morning, maybe a refill closer to noon, hit that .05% mark and maintain it. No drinking after 8pm, no tippling on the weekends. Because this is Science.

The choral teacher gets interested in his students’ lives and problems, the psyche-teacher Dad lightens up. The gruff, bullying coach warms-up to the unathletic shrimp nicknamed Specs, whom he’s written off. And Martin? He starts to take an interest at home, charms his wife with a canoe holiday idea and reaches his students for maybe the first time all term. His new subject? Winston Churchill Franklyn D. Roosevelt, Ernest Hemingway, Adolf Hitler and U.S. Grant and their relationships to alcohol. Vinterberg has a lot of fun with this idea, showing snippets of assorted world leaders bending an elbow, Boris Yeltsin to Boris Johnson, politicians getting the public giggles (Bill Clinton with Yeltsin after goodness knows how many vodkas). Everybody in this teaching quartet is convinced they’re seeing proof of Skårderud’s theory. Riotous sing-alongs, boozy staggering, filling water bottles with vodka for the office and of course, hiding bottles at work. What could possibly go wrong? Zeroing in on Martin, Vinterberg gets at the obvious points — alcohol never solves problems — and goes beyond to consider “why men drink” and drinking camaraderie group sessions, drinking to not think about your problems as you “take the edge off.” The alcohol cure has its benefits, which films haven’t dared show in decades. But there are also chiselled-in-stone statistical risks, from damaging-to-fatal body/ alcohol levels to the probability that some among the four won’t cope or suceed in coming out on the other side. The melancholy Dane Mikkelson, always on the verge of tears in most films (a near-weeping Bond villain), makes the most of a rare opportunity to play it light. We even get a dazzling taste of his pre-acting life as a dancer. Among the supporting players, Bonnevie gives subtle shadings to “the wife is the last to know,” a wife who may have her own distractions. And Larsen, a co-star of Mikkelson and Vinterberg’s The Hunt, is impressive as a tough, bluff guy with a sentimental streak that a couple of beers and a whisky or two brings out. Another Round is a welcome shot of bitters with a warm cognac chaser, and a bracing/revealing renewal of a grand Danish partnership, Vinterberg and Mads his muse.