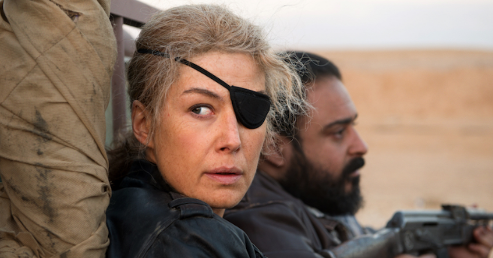 At a time when journalism is fiercely under attack, A Private War provides a portrait of a true war hero in dramatising the story of Marie Colvin, an American journalist who gave her life in pursuance of the truth. The film is a tough and necessary reminder of just how real the news can be as Colvin, played by Rosamund Pike in a committed and emotionally charged performance, reminds her editor Sean Ryan (Tom Holland) of the sacrifices a journalist makes while chasing stories on the front lines. “I see it so you don’t have to,” she asserts after years covering the atrocities of war for the foreign correspondence desk of London’s Sunday Times. This tense exchange sees Colvin fire back at anyone who judges a journalist like herself from behind the comfort of a desk. How can one scoff at or belittle a person who inches closer and closer to death, putting herself in the line of fire to interview people escaping the bullets or searching for loved ones?

A Private War shadows Colvin as she enters one conflict after another. In Sri Lanka, she goes deep into the jungle to score an exclusive interview with a Tamil leader and put news of a genocide on the front page. The dangers of the job are immediately evident in this thrilling sequence that sees Colvin wade through the bush with armed fighters. They encounter resistance and, when Colvin puts her hands in the air to show that she means no harm and identifies herself as a journalist, her opponents fire a rocket in her direction. Colvin loses sight in her left eye following the incident, but the attack doesn’t sway her. True to the adage that “an eye for an eye leaves the whole world blind,” the narrow escape implores Colvin to open as many eyes as she can. She cranks out a massive feature that exposes the crimes of her assailants to the world. The brush with death makes her stronger, as the urgency of her reportage becomes part of her blood. She dons an eyepatch to cover her mangled eye and wears it as a badge of honour. The eyepatch fuels a few good-natured pirate jokes to convey Colvin’s relatable personality, but sight becomes a running metaphor throughout the film as Marie refuses to turn an eye when wilful blindness runs rampant throughout the world. She goes to the frontlines again and again, scooping interviews with leaders like Libyan dictator Muammar Gaddafi and propelling significant human rights crises onto the global stage.

The film doesn’t fall into a hagiographic portrait of Colvin as it shows her pursue stories with reckless abandon. A ballsy stop at a checkpoint in Iraq sees Colvin endanger the lives of her guide and photographer, Paul Conroy (an impressive portrayal by Jamie Dornan), by fibbing to armed guards that she’s a humanitarian. In a sense, she is. Colvin flashes her gym card and takes advantage of the guard’s poor English. The ruse nearly gets her killed, but it also lets her enter dangerous territory and unearth a mass grave. There’s a method to her madness and A Private War puts audiences within the mind of a woman who thinks like a spy and acts like a humanitarian, combining a mighty heart with the crippling responsibilities that come with encountering violence day by day. The time on the frontlines takes its toll on Colvin, who struggles with PTSD and alcoholism. There is a war going on within Marie Colvin as she tries to reconcile the horrors she sees with her thirst to tell more stories. Recurring nightmares about a young girl with her wrists slashed, for example, plague Colvin with the inevitable fact that she cannot save every life. As played terrifically by Pike and realised in this tough and timely dramatic debut from documentary director Matthew Heineman, Colvin is a compelling eye through which to see global conflict. Pike has an uncanny ability to use her body to convey a character’s anguish, as Colvin’s stiffened neck and ever-expressive hands reveal a woman burdened with the moral weight of her occupation and the anxiety it breeds. Partly stripped of an actor’s greatest asset—her eyes—Pike remains ever expressive with her frazzled her and frayed nerves performing double duty. Colvin’s exhaustion and her determination are evident in every frame as she self-medicates with alcohol, and thrives on the rush of being in a conflict zone. When Colvin is safest on the streets on London, Pike looks as if she’s going through withdrawal. Heineman draws upon his own journalistic rigour from documentary filmmaking and provides an all-encompassing view of the hell Colvin encounters. There are subtle details, like a severed limb strewn carefully in the corner of the frame as Colvin surveys the aftermath of a bombing, with which Heineman conveys the pervasiveness of death. Heineman and DP Bob Richardson provide an immersive view that is intimate yet expansive as Colvin gets close to the nitty gritty details she needs to see to tell the full picture. The bombed-out hell of Syria is an exceptionally heart-stopping feat as Heineman recreates the remains of Homs with jarring realism.

A Private War builds to Colvin’s final story, and perhaps her most significant one, as the drama leads to the devastation of Homs in the Syrian Civil War. Title cards flag the proximity of Colvin’s story by noting “X Years to Homs” with each milestone. The final act of A Private War is absolutely devastating as Colvin and Conroy gather evidence that shows the world that they’re being lied to and that countless Syrian civilians are being slaughtered. Colvin trudges through the remains of Homs and witnesses a city that has been annihilated by senseless warfare. There’s a change in Colvin when she arrives in Homs and Pike’s emotional investment in her character asks audiences how one can remain an objective observer to such horror. However, A Private War reminds us that the story’s always better when the writer cares. We need more soldiers like Marie Colvin now more than ever. 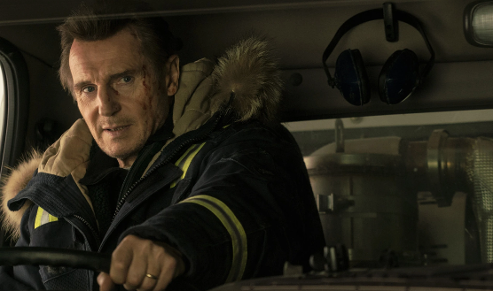 The setting is white - snowy white - but the film's sensibility is black. All black. True to its Norwegian filmic origins, Hans Petter Moland's remake of his 2014 thriller Kraftidioten is blackly funny, overtly violent and filled with a snow plow of quirky elements - and it has Liam Neeson. Comedy is serious business and to its credit, the film is never played for laughs as it’s the characters who splash colour on to Moland's cinematic palette and the cumulative effect of all the disparate elements happily collide as Neeson's protagonist becomes a vigilante in search of vengeance for his murdered son.  There is a disjointed feel about the proceedings, keeping us constantly on edge as different characters dip in and out as they deliver shocks and surprises. It's satirical, irreverent and refreshingly it is also politically incorrect. On a backdrop of breathtaking scenery high in the Rocky Mountains, we first meet Neeson's snow plow driver Nels Coxman and respected family man, as he is awarded the ski-town of Kehoe's top honour of Citizen of the Year. The shock of the sudden murder of his son changes everything, as Nels follows the undesirable characters who become his stepping stones on the road to vengeance. Fists, bullets, chicken wire, icy waterfalls and the vast waterways soon are a way of life and the body count rises quickly.

A consistent amusement throughout the film is the revelation of the many quirky nicknames: Limbo, The Eskimo, Mustang, Sly, Wingman, Viking and White Bull. Their stylish demise is well documented, with the latter three playing the biggest part as a turf war erupts between the Denver drug lord Viking (Tom Bateman) and the American Indian White Bull (Tom Jackson). I also enjoyed the incongruous relationship dynamics between the odd couples. William Forsythe's Wingman and his domineering Thai wife, who makes filing nails appear sinister. With Viking and his supercilious ex-wife (Julia Jones) the poison in the air is tangible. Also nifty is when Viking's young son (Nicholas Holmes) utters the line about Stockholm Syndrome. Look out too for Kehoe's cop duo, superbly played by Emmy Rossum and John Doman.

It's also good to see Neeson in a film that offers a great deal more than just macho action. His credibility and charisma are critical to the film's success and he manages to bring warmth to what otherwise might have been just another relentless bloodbath of goodies and baddies.