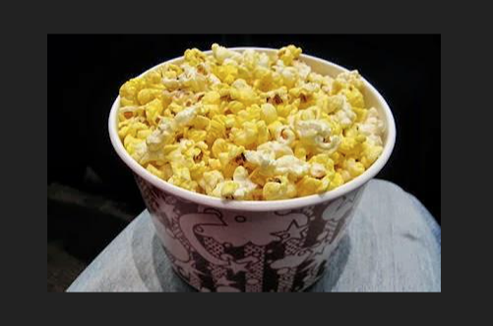 Why You Should Never Eat Popcorn In a Cinema

Have you ever noticed that eating too much popcorn in a cinema can make you feel sick? That's because it probably is making you sick. Popcorn may seem like the one snack available in a cinema that’s not that bad for you. After all, popcorn is just corn, a whole grain. If you ask for it without butter, surely it’s reasonably healthy? Actually it isn’t at all. As you probably know, some cinema chains buy pre-popped popcorn, which is warmed up using lights in the foyer. Pre-popped popcorn is typically cooked in unhealthy trans fat oils, and flavoured and coloured with artificial ingredients, often including MSG. As this kind of popcorn is popped first, then stored for an unknown amount of time, it has preservatives added. Cinema foyer popcorn typically contains four individual supply products, including the popping corn, cooking oil, butter and seasoning salt. The corn itself is grown using insecticides, herbicides, fungicides, fumigants and other chemicals used to "treat" the corn. Most cinema popcorn is cooked in an oil product that is mostly hydrogenated coconut oil, a highly toxic trans fat. The oil used for popcorn also contains artificial butter flavouring. That's why when you ask for no butter, the popcorn still slightly buttery, and has a weird yellow colour. So if you order popcorn with no butter and no salt, that's what you're getting: corn that has been compromised by insecticides, herbicides, fungicides, fumigants and other chemicals, as well as trans fats, artificial flavours and preservatives. What if you do go for the butter and salt? The artificial-butter-flavoured topping is typically made mainly from hydrogenated soya bean oil (another trans fat), artificial flavouring, beta carotene for colour, and preservatives. Different suppliers use different brands or supply sources, but this roster of toxic ingredients is typical.

One flavouring agent used in popcorn butter is called diacetyl, and it has been associated with lung disease among workers in the factories where it's made. Popcorn supply companies don't have to disclose the use of diacetyl, or specific exactly what their flavouring agents are made of. So popcorn comes out as an assault on our health. From the report: "One standard bag has 1,610 calories. That’s like eating six scrambled eggs with cheddar cheese, four bacon strips, and four sausage links before the lights come up." If you enjoy eating popcorn at the cinema, why not bring your own? Unless you ruin it with chemicals and other junk ingredients, popcorn is extremely healthy. Buy organic popping corn from your supermarket , put in an air popper, and add a little extra virgin olive oil and a little sea salt, then smuggle it into the flicks.

The whole thing will cost less than one-tenth of what you'll pay at the cinema and it will taste so much better - and best of all, it will actually be very healthy, instead of a massive toxic hit to your body.

ARTICLE
Things Hollywood has taught us:
 
1. Large, loft-style apartments in New York City are well within the price range of most people - whether they are employed or not.
2. At least one of a pair of identical twins is born evil.
3. Should you decide to defuse a bomb, don't worry which wire to cut. You will always choose the right one.
4. Most laptop computers are powerful enough to over-ride the communications system of any invading alien society.
5. It does not matter if you are heavily outnumbered in a fight involving martial arts; your enemies will wait patiently to attack you one by one dancing around in a threatening manner until you have knocked out their predecessors.
6. When you turn out the light to go to bed, everything in your bedroom will still be clearly visible, just slightly bluish.
7. If you are a blonde and pretty, it is possible to become a world expert on nuclear fission at the age of 22.
8. Honest and hardworking policemen are traditionally gunned down three days before their retirement.
9. Rather than wasting bullets, megalomaniacs prefer to kill their arch-enemies using complicated machinery involving fuses, pulley systems, deadly gasses, lasers, and man eating sharks, which will allow their captives at least 20 minutes to escape.
10. All beds have special L-shaped cover sheets that reach the armpit level on a woman, but only to the waist level on the man lying beside her.
11. All grocery shopping bags contain at least one stick of French bread.
12. It's easy for anyone to land a plane, provided there is someone in the control tower to talk you down.
13. Once applied, lipstick will never rub off - even while scuba diving.
14. You're very likely to survive any battle in any war unless you make the mistake of showing someone a picture of your sweetheart back home.
15. Should you wish to pass yourself off as a German or Russian officer, it will not be necessary to speak the language. A German or Russian accent will do.
16. The Eiffel Tower can be seen from any window in Paris.
17. A man will show no pain while taking the most ferocious beating, but will wince when a woman tries to clean his wounds.
18. If a large pane of glass is visible, someone will be thrown through it before long.
19. If staying in a haunted house, women should investigate any strange noise in their most revealing underwear.
20. Word processors/computers never display a cursor on the screen but will always say: "Enter password now."
21. Even when driving down a perfectly straight road, it is necessary to turn the steering wheel vigorously from left to right every few moments.
22. All bombs are fitted with electronic timing devices with large red readouts so you know exactly when they're going to go off.
23. A detective can only solve a case once he has been suspended from duty.
24. If you decide to start dancing in the street, everyone you meet will know all the steps.
25. Police departments give their officers personality tests to make sure they are deliberately assigned a partner who is the total opposite.
26. When they are alone, all foreign military officers prefer to speak to each other in English.
THOUGHT FOR THE DAY
When NASA first started sending up astronauts, they quickly discovered that ballpoint pens would not work in 0 gravity. To combat this problem, NASA scientists spent a decade and $12 billion developing a pen that writes in zero gravity, upside down, underwater, on almost any surface including glass and at temperatures ranging from below freezing to over 300aC.
The Russians used a pencil.