WHERE IS ANNE FRANK 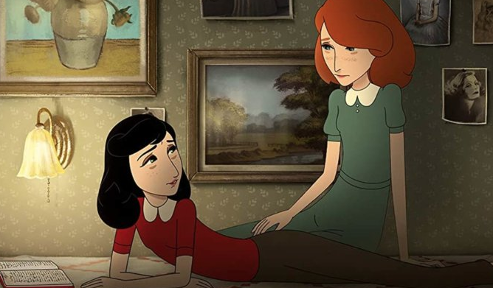 A storm rages in Amsterdam, but that doesn’t deter visitors from lining up outside the Anne Frank House to get a glimpse of her famous diary and gaze upon the rooms she once inhabited. A home address re-fashioned as a must-see tourist attraction for quick photos and perhaps some short-lived introspection. Outside its doors, a family of refugees becomes homeless when the inhospitable weather tears apart their makeshift shelter. That’s how Ari Folman’s spellbinding animated feature Where Is Anne Frank opens, a storytelling epiphany that reframes the past and interrogates our present. Its rhetorical title takes on a literal connotation via a revitalised rendering of the eponymous teenager’s final years. No stranger to the animated medium, Folman exploits it for all its narrative potential to cross over time and space, and for its capacity to serve as a poetic vehicle for real-life harshness. The Oscar-nominated Waltz with Bashir vouches for his approach. Told from the naive vantage point of her imaginary pal Kitty (voiced by Ruby Stokes), who searches for her in the modern world, the film invokes parallels between the Holocaust and the current humanitarian crises of displaced people from Ukraine, Africa and the Middle East. These don’t equate the two nor imply the root causes respond to a similar context but speak to Otto Frank’s conviction that saving even one life is a worthwhile undertaking. With a responsibility to the source material, the Israeli writer-director straddles a challenging line between the subtly educational, the aesthetically lyrical, and the incisive assessment of Anne Frank’s multi-shaded personality. Where Is Anne Frank is decidedly mature but still targets the same demographic that would read the original book in school - adolescents able to grasp its moral intricacies.

This hand-drawn animated vision is visually elaborate and with great depth given to the environments where some of the backgrounds were first created as physical miniatures with the drawn characters brought in later.  Ink from the revered diary gives life to Kitty. As she rises from the aged paper, she discovers her invisibility to people around as long as she remains inside the museum. The coloured liquid that floats and dissolves in the air also functions as a portal for Kitty to reconnect with her time with Anne, first in her family’s home and then in their hiding place. Ink is animated almost as a life form, which is one of the most impressive effects in the film that also reads like a strong motif. If Kitty gets too far from the object holding the words that granted her existence, she fades away. A metaphor, perhaps, for how we’ve lost sight of Anne’s ordeal as a Jewish person in Nazi-controlled Europe. As we forget and stray from the path of compassion, our humanity also begins to vanish. The artistry of the animation and Folman’s deliberate rendition of Frank’s temperament show what Folman seems to demand in that if we are going to co-opt Frank’s former abode and her private thoughts on the book that’s become synonymous with her, then we must also address the full extent of the unspeakable degradation she endured and how our apathy and lack of empathy are allowing other abhorrent injustices to occur right in front of us now. The climax to Where Is Anne Frank, brims with hope and sincerity that could be seen as sentimental, but in the context of this emotional expedition, it offers hope that we can actually grow and genuinely care for each other. 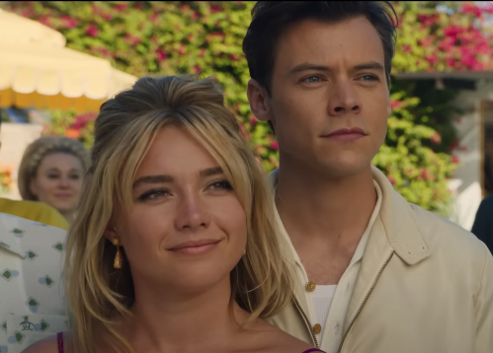 Olivia Wilde’s second feature Don't Worry Darling won’t win any Oscars, but it’s reasonably entertaining, with more than enough cinematic spit-and-polish to justify a big-screen theatrical viewing. The screenplay, courtesy of Booksmart co-writer Katie Silberman, is relatively formulaic with the film opening up on a big party scene, showing off the men and women living in the company town of Victory. Modelled on 1950s Americana while also intended to remind you of World War II-era secret cities era (where men went off to build the atomic bomb while their blissfully unaware wives stayed at home). Victory is run and overseen by the mysterious Jack (Chris Pine). His company subsidises every material need of the residents, with the understanding that the wives do their domestic duties and never leave the town. Inevitably, one housewife, Alice (Florence Pugh), starts stumbling upon dark secrets that exist just past this mysoginists’ blissful suburbia. The Stepford Wives is an obvious inspiration alongside television shows such as WandaVision in an era of revamps, remakes and reboots. While the film’s eventual twists, turns and revelations aren’t going to stretch your mind, Wilde does very well in the helming stakes. Even if you manage to predict the destination, there's still plenty to engage with during the journey. We're offered scrumptious, Hollywood-worthy production values going hand in hand with fluid set pieces, juicy character turns, hot film stars and unapologetic female pleasure.

Florence Pugh receives marital satisfaction from onscreen spouse Harry Styles in the film’s opening scenes and she is as good as you’d expect here, playing a young woman finding cracks in the façade and constantly getting gaslit (defined as making someone question their own reality) about the eventual truth. Pine relishes the chance to play a smarmy villain, and the film uses his devious charms sparingly. Styles is as good as he needs to be, and frankly, I’d argue some of the criticism of his performance from other sources should be more about the role than the actor. Styles successfully brings to his characterisation a presumption of innocence and wilful naiveté. You question how much he knows in a way you wouldn’t with, say, the originally cast Shia LaBeouf. Olivia Wilde has a small but crucial supporting role as a kind of mother of the group, while Gemma Chan has only a few choice moments as Pine’s wife and the town dance teacher. KiKi Layne does a lot with very little. It’s probably not an accident that this dark-skinned woman finds herself unable to cope with the conventionally ‘perfect’ post-World War II community. It’s an example of race-conscious, rather than race-blind, casting. The rest of the cast, including Nick Kroll, mostly fades into the background. Most of the melodrama centres around the heroine, her husband and the presumed puppet master. For general cinemagoers who want to see a fantastically un-erotic thriller with a photogenic cast set loose in a visually dynamic fantasy world, that’s exactly what the film provides – and in terms of directorial talent, Olivia Wilde proves that

Booksmart was no fluke.