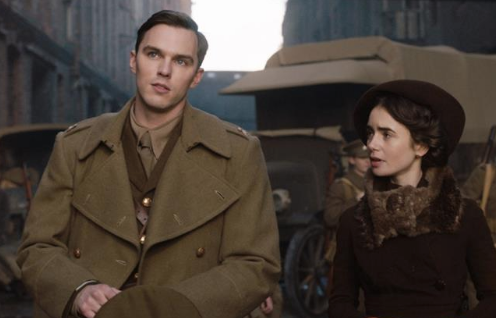 Tolkien (Nicholas Hoult) is a modest period drama that offers a sedate portrait of the storyteller’s academic life. Stephen Beresford and David Gleeson’s screenplay devotes more attention to Tolkien’s fascination with ancient and fictional languages than it does to his forbidden romance with Edith Mary Bratt (Lily Collins) – but it displays genuine interest in the nerdy esoterica that inspired its subject. While it still dilutes Tolkien’s memory by moulding his life to the narrow dimensions of a middle-brow feature that’s too safe for the arthouse and too small for the multiplex, at least it does so in a sincere attempt to trace the etymology of Tolkien’s work, and to emphasise that where stories come from can be as meaningful as where they take us.

This portrait of the artist as a young man gives us Tolkien as a gifted student who finds himself staring down the barrel of a war that he’d rather not fight. But before we get to the battlements, and the sketchy (if accurate) suggestion that the character of Samwise Gamgee was inspired by the batmen Tolkien met during his time as a soldier, the film first has to blow through Tolkien’s entire childhood. Tolkien (the teenage version of whom is played by Harry Gilby) and his little brother are orphaned when their mother dies at 36 and leaves them in the care of the stern but kind Father Francis Morgan (Colm Meaney). The siblings are penniless, but John Ronald’s budding genius earns him a spot at the posh King Edward’s School, where the new student finds himself bullied by three interchangeable boys who will soon become his closest friends. For all the time this film spends on Tokien’s allegiance to Robert Gilson (Patrick Gibson), Geoffrey Smith (Anthony Boyle), and Christopher Wiseman (Tom Glynn-Carney) — a foursome of nerdy scoundrels who bonded over their mutual fondness for sneaking tea into the school library — these characters never blossom into their own. Peter Jackson’s trilogy wrings more personality from Sam, Merry, and Pippin in 20 seconds than Tolkien does from their supposed real-life equivalents in two hours. Some of the script’s clumsier attempts at drawing a connection between them are truly painful. “We should form a club,” one of Tolkien’s pals says.  “A brotherhood.” Later: “This is more than just a friendship… it’s an alliance.” Eventually, it starts to feel as though Tolkien is suggesting that the author’s entire life was a search for a certain word, and that a quick look at a thesaurus could have spared him a lot of time. Needless to say, when he arrives at “fellowship” in the final moments, that epiphany lands with all the grace of a drunken wrestler.

Alas, that isn’t the only regard in which Tolkien tries to draft off the audience’s pre-existing connection to the author’s work, and — perhaps even more importantly — to the other films that have already been inspired by it. The oft-repeated ethos of Helheimr, the boys’ carpe diem-like code for self-betterment and seizing the day, tends to clash with the magical thinking the script inflicts upon their story; it’s hard to live in the moment when many of those moments are reverse-engineered from how they might have impacted a series of fantasy novels. Tolkien’s trip to the opera leads to at least two different jokes about how it shouldn’t take six hours to tell the story of a magic ring. You probably get it, but there’s really very little here for you if you don’t. And yet, that trip to the opera is the film’s strongest passage. More than any other sequence, it has a self-contained soul of its own; a rare and refreshing change of pace in a film that tries and fails to exist beyond the shadow of its subject’s destiny. Hoult may feel miscast for his size, but he’s an excellent actor whose furrowed brow hints at the profound confusion that Tolkien navigates between the magical thinking of his imagination and the grim reality of the encroaching political crisis. His screentime with Collins is limited, and this fine actress is boxed in by a very typical “wife of a great man” part, but she plays repressed desire with a zeal that believably gets under Tolkien’s skin, and reinforces the wastefulness of war.

When Tolkien and Bratt sneak into the opera and listen to Wagner from the narrow alley behind the stage, Karukoski’s camera pulls back to reveal a trench of a different kind. For once in this otherwise listless movie, art and life are fluently melded into one. Tolkien may not be a worthy tribute to the people who made it possible, but it convincingly reminds us that Tolkien’s writing is. 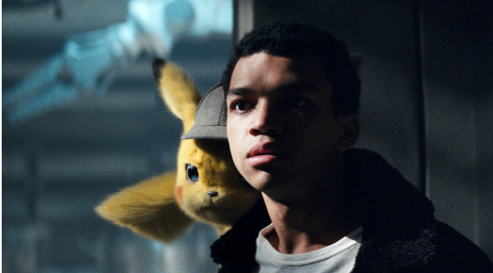 Warner Bros. has the impossible task of trying to make the live-action Pokémon Detective Pikachu film appealing and likeable for a film-going audience that extends beyond nostalgic adults reminiscing over their trading cards, and children caught up in their current Pokémon obsession. Detective Pikachu can’t ever hope to achieve what The Pokémon Movie, a 1999 animated classic that saw children drag their less-than-enthusastic parents into cinemas around the world, did for fans of the game. The Pokémon Movie was a rare jewel that found emotional depth in a superficial topic. Detective Pikachu, on the other hand, is an attempt to be more than a video game adaptation that pays homage to Pokémon — the creators clearly want to turn its Pokémon into actual characters, in a world that doesn’t find them exceptional at all. But in the effort to define Pokémon by something other than their ability to be cute, weird game devices, director Rob Letterman and the film’s five-man story and writing team pull off an undeniably magical feat. Detective Pikachu is the first post-Pokémon film. It recognises that people know who Pikachu is, what a Pokémon battle consists of, and how humans interact with their pocket-monster pals. That lets Pokémon exist in the film’s background, making that existence unremarkable in the process. This simple, grandiose act of not treating Detective Pikachu like an origin story creates a world where Pokémon are a normal part of everyday life, which is what the original games taught young players a perfect, Pokémon-filled world looked like. Humans and monsters living in harmony — that’s the vision that comes to life in this live-action re-imagining of the Pokémon world. Detective Pikachu isn’t well-constructed or a compelling mystery, but it is a wonderful dream come true, a strong and memorable vision of what a world populated by Pokémon could become.

Detective Pikachu is a traditional whodunnit story, except that it replaces the femme fatale with an electric yellow mouse. Tim (Justice Smith) is investigating his father’s disappearance, and he winds up partnered with a strange Pikachu (voiced by Ryan Reynolds) to try and retrace his dad’s last steps before he vanished. Their investigation leads them to budding news reporter Lucy Stevens (Kathryn Newton), her Pokémon chum Psyduck, and a much bigger story. There aren’t any gasp-inducing twists or turns in Detective Pikachu; the film’s entire plot is easily worked out within the first 25 minutes, which isn’t surprising, considering it’s aimed at those under 20. It’s not a head-scratching mind-bender, and it isn’t supposed to be. Instead, Detective Pikachu is a fever dream — a product of night time car rides with a Game Boy, staring up at the street lamps that pass you by, painting the darkened sky with wild perceptions of what a world full of Pokémon might feel like. Detective Pikachu is a silly, almost hallucinogenic ride. An emotional connection to established characters is a prerequisite for most entertainment these days, but unlike franchises like Star Wars, Lord of the Rings, or Harry Potter, the world of Pokémon outside of the original 151 characters is still a comparatively niche one. Pokémon Go is a worldwide phenomenon, and the Pokémon games have been part of people’s lives for decades. Even so, the names of strange-looking creatures, scaly and fuzzy, monstrous and adorable alike, don’t exactly roll off the tongue. Terms like “ghost-type” are still more foreign to the non-gaming mainstream than “wizard” or “Jedi.” Grandparents know the names Luke Skywalker and Harry Potter, but it’s unlikely they know what a Lickitung is, or whether it’s a condition that requires a doctor’s intervention. The humans are the foreign creatures in Detective Pikachu, not the creatures who roam around the countryside and live within the concrete jungle of Ryme City. This isn’t a story about Pokémon aiding the establishment and governed by the slightly narcissistic actions of a Pokémon trainer. Detective Pikachu puts Pokémon plights first and uses the creatures’ interactions with human partners as a chance to examine the Pokémon perspective and what it’s like to live as one of them. This is the first time a live-action outing based around Pokémon has treated its main attraction as the star characters they’re meant to be. Previous Pokémon films always leveraged the perceived relationship between trainers and their brood of creatures as a way of getting a human protagonist to the end of a chosen journey.  Detective Pikachu’s approach combines the best of rare Pokémon films, like The Pokémon Movie, with the strengths of the main game franchise. This is a world where Pokémon aren’t enslaved, where their relationships with trainers and average, everyday people is more akin to close friendships between pals than a power struggle between owner and pet. This simple approach to a Pokémon story is what keeps Detective Pikachu fresh enough to stand out for long time fans.

The film embraces the inherent goofiness of a world full of pocket monsters and leans into the absurdity of that world instead of trying to normalise it or turn Pokémon into some huge, significant metaphor. Pokémon has always relied on the intimate relationship between players and their creatures, and Detective Pikachu follows that train of thought by honing in on Pikachu and Tim’s day-by-day blossoming friendship. Even at its most absurd, the film is still funny and endearing. This, however, isn’t a timeless work of cinematic genius. Instead, it’s a chance for Pokémon diehards to spend two hours inside a universe many others have invested in for years. It’s a hilarious, carefree, fun romp through a familiar place, and it’s just different enough to add a much-needed twist to a formula that was growing tired.