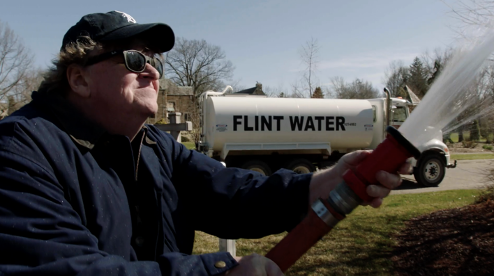 Some years ago, Michael Moore sat at the same table as Donald Trump when they were both scheduled as guests on an American television talk show. Knowing what we know today, the implausibility of that image is amusing, but Moore wasn’t laughing. Trump, clearly nervous about the prospect of facing Moore’s imminent firestorm of a debate, initially refused to be a part of the interview until the controversially outspoken filmmaker agreed to tone down his attack-dog rhetoric. Moore agreed and traded his pressing questions for cheap jokes. In the narration, he tells the viewer how he was shocked to learn that Trump enjoyed his first film, Roger & Me, which steamrollered over General Motors’ then CEO Roger B. Smith. Trump then said, “I hope he never does a film about me.” Nobody would want to be on the receiving end of one of Michael Moore’s investigations, but after watching this latest explosive film, you’ll understand why Trump was particularly wary. At its core, Fahrenheit 11/9 is a compilation of anger, not directed entirely at the USA’s current administration, but which certainly attempts to answer the most popular question from 2016: “how the fuck did this happen?” It turns out the answer is not as simple as, despite winning the popular vote,  Hillary Clinton bizarrely lost, or the obsessive media coverage, or even the Russians. Moore bulldozes his way through the events of that election night – and what led to it, painting a picture not of a tyrant slipping into power, but rather of a society that threw the banana skin down. The Republicans are to blame. The Democrats are to blame. Beyond that, we’re told once again that the largest political party in the country are non-voters. Conservatives, liberals, protestors, counter-protesters, bigots, and even Gwen Stefani are all points of interest on Moore’s extensive list of culprits. It is shocking to now watch now in retrospect an array of respected American journalists and celebrities laughing at the very idea of a “President Trump” - thinking that the one good thing that might come from a Trump victory would be the deactivation of his Twitter account…

Moore did warn us back then not to dismiss “Real America,” the silent majority of the angry working class in the USA who are portrayed in a not so glamorous light here. He reminds us early on that he made that warning, and in doing so, separates himself from the rest of the nation’s accused. Moore manages to effectively display and elaborate upon his disgust, which is also directed at the water crisis continuing to face his home town of Flint, Michigan. The city’s water is infamously polluted with a deadly amount of lead. It’s a years-long scandal riddled in political corruption that has yet to be legally concluded. Moore’s method of addressing the issue is by first calling in to the odious Governor Rick Snyder’s office to conduct a citizen’s arrest. When that fails, Moore unloads a hose from a water truck and sprays the governor’s lawn with the poisonous water served to his people. Fahrenheit 11/9 feels extremely urgent as in the sequence where he shows President Obama, whom Moore tellingly also calls into question, conveying the terrible costs of Democratic compromise at the time when Obama finally flew in to Flint but did nothing about the situation. This was indeed one of the low points of the Obama presidency and Moore does not let him off for a second. He markets the 2018 midterm elections as the most important in his lifetime. Though 11/9 has an abundance of “America is doomed” moments, Michael Moore seems conflictingly convinced that there are certain Americans who can pull their country out of the hole. Hope points towards the younger generations of political activists, including congressional candidate Alexandria Ocasio-Cortez, as well as the very much active Parkland shooting survivors, all of whom were unable to vote in 2016. The scenes dedicated to these young leaders and Flint’s polluted water are intoxicating and they make up the bulk of the film’s strength. I was shocked to see how much more there was behind the familiar headlines.  The Trump parts are less poignant - Moore is aware that a solely Trump tale would add little to the debate. One rather predictable sequence sets up a comparison not lost on many Americans. He tells us that there are no perfect comparisons in history - and I shuddered when I learned that the Nazi Party didn’t win the popular vote either but Hitler still won through.