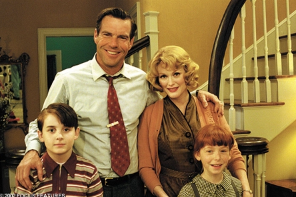 Writer-director Todd Haynes's Far from Heaven (2002) is a masterful, intelligently rewarding film.  In the autumn of 1957, we meet Cathy Whitaker (Julianne Moore), a typical housewife living in a typical suburb near Hartford. Her husband Frank (Dennis Quaid) is an executive at Magnatech, a television set manufacturer. They are financially at ease, hugely respected in their social circle, and give the external impression of being a perfectly united family as those portrayed in films and advertisements from the period. However, behind the appearance of unity, their marriage is on the verge of disintegration, for reasons which may bring scorn upon the family. An masterful homage to the work of director Douglas Sirk (All That Heaven Allows, Magnificent Obsession and more), Far from Heaven is a claustrophobic melodrama in which suburbia, and by reduction, the average household, with its prejudices and pretensions, serves as a microcosm of fifties America. Apart from a glimpse of a speech by President Eisenhower and a mention of Joseph McCarthy, what was going on in the United States or the rest of the world at the time is never alluded to. Haynes's film is a bold attempt on two fronts: to dispel myths about the "Golden Age" of America, and to hold up a mirror to still-prevalent attitudes. Other films have dealt with the deconstruction of the picture-perfect fifties America image, but for each such film, there are at least twice as many to reconstruct it. In fact, even at the time, films dealing with more controversial subjects were released. With the gradual relaxing of the Production Code in the second half of the 1950's, topics which would normally have been taboo began appearing on the screen, whether it was apparently unexplainable juvenile delinquency in Rebel Without a Cause (1955) or widespread social scandal, fifties style, in Peyton Place (1957). Even Ben-Hur (1959), the most famous of all biblical epics, had, according to Gore Vidal, an intentional homosexual subtext. However, by the standards of today, these films would be considered mild, and their overt treatment of taboo issues, whitewashed. Far from Heaven, because it is detached from the period it covers, deliberately recreates the quaint and stiff texture of the films of the era to denounce the hypocrisy of the period, but also of the present day.

Far from Heaven is intentionally postmodern yet remains beautifully heartfelt. Because we are able to measure the cultural differences between the late fifties and today, Far from Heaven's success is in making a modern audience realise that what we think today and the way we now express it may eventually be considered as artificial as the treatment of important issues fifty years ago. In one scene, a doctor explains that society has evolved in its treatment of homosexuality, and explains that there is now a cure for the "illness", but we know from perspective that what appeared to be open-mindedness during what is arguably the most conservative period of the twentieth century is, by the standards of today, primitive. The film also plays on our conventions of gender, with a healthy reference to the discrepancies between the on-screen image and the personal life of leading man Rock Hudson, who not surprisingly starred in a plethora of Sirk films, including All that Heaven Allows.  Far from Heaven's treatment of racial relations follows the same pattern. The fifties middle class' superficial commitment to racial integration and latent prejudice toward black people are put in full view. When Cathy Whitaker befriends her black gardener, Raymond Deagan (Dennis Haysbert), she is frowned upon by her community as though she had turned into a witch. Not surprisingly, race is still a controversial issue today. However, while Haynes's film is a delightfully effective reappraisal of popular culture and social conventions, it is, almost certainly purposefully, not a melodrama. In fact, there is no visible dedication to the genre except as a vehicle through which Haynes's social commentary is channelled. Melodramatic films as done by Sirk and others are unheard of in today’s highly cynical world, but although Haynes has very few concerns for the genre, he seems to have wanted to retain the seriousness with which such films were received then, perhaps in the belief that people would understand his message. This implied making the issues at stake more direct for modern audiences. The old-fashioned credits (the title is displayed slantwise, in a handwritten style), a haunting score by veteran composer Elmer Bernstein, exquisite set decoration, filled with fake wooden panes and other kitschy mementos from the era, and Edward Lachman's perfect colour-saturated cinematography reminiscent of old Technicolor films, which would make even the most recent buildings look period (an art gallery in the film was almost certainly not built by 1957), seem to have been included as artifices to create an old-fashioned atmosphere that could not be instilled by the story alone. What the story avoids is the obscure innuendos and double entendres, euphemisms and well-placed silences, tell-tale clues that filled films from the fifties to indicate to the viewer that something disreputable was being discussed while never being too explicit about it. There are occasional examples of this subtlety - one scene at an art gallery and another at a ballet recital, for instance. Far from Heaven is an outstanding film and its highlights are a superbly restrained performance by Julianne Moore, and excellent supporting actors in Dennis Quaid, Dennis Haysbert, and Patricia Clarkson as Cathy's friend. The music, costume and set design are served so well with the beguiling cinematography perfectly serving the setting.