Tom Cruise is possibly the personification of the last dying breath of the age of true film stars, he constantly puts everything, including multiple kitchen sinks into making cinema features designed for the biggest screen possible, and with all the work that requires to make it look believable. He refuses to settle for less – he's the man who has broken an ankle during a stunt and kept running to keep the take, performed several actual high altitude skydiving jumps for the sake of realism, and only agreed to come back to the world of Top Gun if everything could be done practically. And that’s exactly what Top Gun: Maverick gives us. This 25-plus-year-belated sequel to the Eighties cultural phenomenon isn’t just a vast improvement on the dated original, it’s an altogether exhilarating action blockbuster in its own right, in no small part because of the amazing, real aerial feats and photography, beautifully captured and built for you, the punter, to make your way to an Imax screen. While the sorely missed Tony Scott’s original film nowadays has its own nostalgic charm and its own impressive sequences, it’s hard to say it’s satisfying from any sort of narrative standpoint. Top Gun: Maverick picks up that slack and crafts a classically simple, but graceful and affecting, comeback story designed to give you the most it can achieve.

Catching up with Pete “Maverick” Mitchell (Cruise), we find that he never quite left his lone-wolf hotshot days behind, still a captain pulling tricks when he could be much more. He’s called back to the United States Navy Strike Fighter Tactics Instructor programme – the eponymous Top Gun – for a daunting mission: teaching a group of pilots their way through a nigh-impossible attack on a (notably anonymous) enemy uranium plant.One of his students is Rooster (Miles Teller), the son of his old cohort Goose who died in his arms 30 years earlier. There’s tension there, but maybe they each have something to learn from each other. As he also catches up with an old flame, Penny (Jennifer Connelly), and deals with the tough, by-the-book disciplinarian Cyclone (John Hamm), Maverick has to grow alongside his students to finally become the man he’s refused to mature into. It’s a fairly straightforward narrative, but that doesn’t mean the film isn’t not gripping.

The character arcs and plot lines plus the climax all exhibit an emotional backbone that’s actually cathartic. The fighter jet sequences find a balance between function and beauty as the camera takes you from gorgeous wide shots of the aircraft bolting through the air to inside the cockpit with the actors, who are all performing from inside these planes. Director Joseph Kosinski with his regular cinematographer Claudio Miranda, finds all the right angles to make this a totally grandiose, cheer-out-loud affair, with a thankfully lean script. This is the ideal example of a blockbuster and one of the best legacy sequels ever: a film that knows how to move along and give you what you came for.  Frequently it feels like a knowing testament to Cruise as a performer, specifically as one of the last of a certain generation of stars, and certainly dealing in some melancholy as a once-in-a-lifetime performer is getting older. When Ed Harris’ character Rear Admiral Cain warns Maverick that drone-controlled aircrafts will soon replace analogue operation, the daredevil pilot simply retorts: “Maybe so, sir. But not today.”

As he climbs into that cockpit to deliver what will ultimately be one of the most tangible, impressive, invigorating films of the summer, it’s hard not to read it all as a celebration of a man who refuses to leave the danger zone. 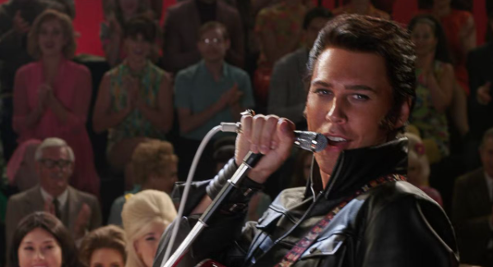 Never knowingly anywhere below the top and frequently quite some distance over it, there is no film director around who can muster the wildest excesses of glitzy opulence quite like Baz Luhrmann. Put him together with the subject matter of Elvis Presley – from Beale Street tailored jacket to ludicrous Las Vegas jumpsuit – and you have a match made in ostentatious flamboyant nirvana. Luhrmann’s biographical film doesn’t fully convey the entire scope of Presley’s unprecedented influence on modern music and culture but within the almost three hours running time – it partially succeeds through sheer panache, verve and eye-watering sound and vision.  His early influences impacted hugely on Elvis Aaron Presley – his impoverished upbringing, a devotion to his alcoholic mother and the permanently imprinted influence of black music. The man who would be King, with his magenta suit, jet-black hair, Memphis drawl and above all, a dripping sex appeal, all came together to transform his youthful naivety into a mesmerising persona that resulted in audiences turning feral at every performance. The film shows the physical exertions of performing, as Presley’s transfixing thrusts and gyrations are lubricated with dripping sweat - and relative newcomer Austin Butler gets the moves, the voice and, most importantly, Elvis’ charisma down perfectly. Despite whatever flaws the film has - and there are a few - Butler’s Elvis is utterly mesmeric. Although it emphasises the Elvis sex appeal that made women go nuts at his every swivel, sadly there’s no real attempt to explore the contradictions and thorniness of areas such as in his relationship with the teenage Priscilla, nor his multiple infidelities, politics, or drug abuse. Anything that would make Elvis unappealing or problematic by today’s standards is unfortunately bypassed.

Through dizzying multi-split-screen montages the film whizzes through the details of Elvis’ ascendancy into the mainstream. As his success grows, his costumes become flashier and the sideburns substantiate - as Presley harbours dreams of becoming a serious actor. His image, face and name are relentlessly merchandised, while his hip convolutions incite a moral panic. Luhrmann skips the gorier details to focus on the fairytale – and as every fairytale needs a villain, enter the nauseating, leeching long-time manager, Colonel Tom Parker, played as an eyebrow-arching cartoon villain by Tom Hanks, prostheticised to a ludicrous degree. The parasitic relationship which sees Elvis swindled by this odious Svengali to cover up Parker's huge debts – is only lightly touched upon. Later - riddled with enormous financial liabilities of his own, Elvis reluctantly continues performing in the mausoleum of a Vegas hotel until his tragic death. In the run-up to this, Elvis’ decline into a bloated, sweaty parody is chillingly segued on screen, as Butler’s take turns to actual footage of a grimly obese Presley in deeply uncomfortable decline during his last-ever performance, as he renders a sweat-drenched and seated ‘Unchained Melody’.

Apparently Denzel Washington rang Luhrmann and convinced him that Austin Butler, with whom he'd been working on a stage play, was a casting essential for the title role, and how right he was - as Butler is sensational. Conversely, Tom Hanks, for me, is a massive miscasting – as when an actor such as he, becomes far too famous himself, taking on the role of an infamous real life character can become an impossible hurdle to overcome, as is the case here, thus leaving the viewer disenchanted and unconvinced, with his hammy performance as Parker being a contrivance too far.