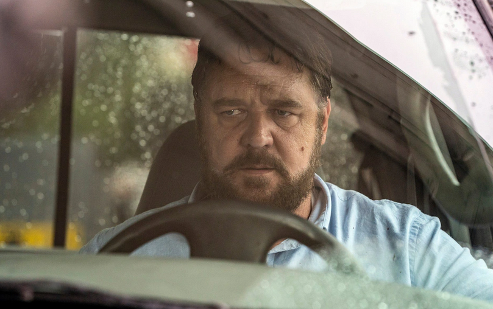 Putting aside a memorable turn as the execrable Roger Ailes in tv's "The Loudest Voice" - “Les Misérables,” “The Water Diviner” and “The Nice Guys” are the only moderate highlights in Russell Crowe’s recent big screen output, so it’s difficult to accept that the cult of Crowe on film still exists and pretend that he remains a gladiator of cinema. His latest, “Unhinged” from director Derrick Borte, could only be generously described as a homage to Joel Schumacher’s “Falling Down” by way of Steven Spielberg’s “Duel.”  This is the story of a driver — conveniently credited as ‘The Man’, although at one point he claims to be called Tom Cooper - just like that — and who’s clearly upset, as a pre-credit sequence makes clear, about his recent divorce. Eventually, he decides to take that frustration out on a hapless victim, and that more or less makes up the entire film.

It starts simply enough. The Man is sitting in his car, the rain lashing down with his windshield wipers squishing back and forth. He tears off his wedding ring and lights a match. The proverbial fuse has been lit — but “Unhinged” doesn’t waste time on its blunt metaphors. In a brutally lengthy take, The Man exits his car and takes out his anger on a houseful of occupants with a hammer. From there, “Unhinged” plays like a trailer for its own one-note premise, with footage of cars veering into each other and supermarket brawls, to set the scene. This is bludgeoned into our senses, and somehow, this quasi-documentary scene-setting ends up as the highlight of the feature, because everything that follows is a misogynistic mess. Yes, “Unhinged” relies upon the threat of violence against women for tension. If that wasn’t bad enough, it also suggests that some women might just deserve it because they’re bad mothers who wake up late when they need to take their son to school, fail to keep on top of work, and are indignant when powerful men try to tell them how they should behave.

Rachel (Caren Pistorius) ends her sleep on the sofa next to her book: “How to Help Your Child Cope with Divorce.” Rounding off her poorly written exposition/backstory, her lawyer calls to let her know her ex-husband wants half of her house. As she takes her son to work, they wind up in a series of gnarly traffic jams before getting stuck behind a jeep filmed to look like a malevolent monster truck. The traffic lights change; the vehicle doesn’t budge. Rachel beeps her horn — and The Man pulls up alongside her car, deeply offended and ready to unleash more violence on a helpless target – and there you have it. There are, it has to be said, some interesting things that the film might have offered about road rage, the chaos of modern life or especially mental illness. But both screenwriter and director never look beyond the ghastly surface, which means that the viewer is unable to engage with any of it. The story is so badly constructed that we're never in doubt about where it's going, so it becomes a slasher horror rather than a nihilistic, psychological thriller.

This palindromatic outing from spectacle-meister Christopher Nolan is a slick action thriller, but it just gets a little too complicated and pleased with itself, through never-ending explanations about “time inversion”, for its own good. Armed with only one word – Tenet – and fighting for the survival of the entire world, the Protagonist (which is both his name and character position in this (John David Washington) journeys through a twilight world of international espionage on a mission that will unfold in something beyond real time. Not time travel, but inversion. No one can deny the shiny levels of cinematic achievement that a storyteller like Christopher Nolan can bring to the big screen, but while Tenet certainly dazzles, it also lays bare a lack of any real emotional core, dumping us straight into the action. Even though as a result, this film falls into the category of “lesser” Christopher Nolan films, that isn’t taking away from anything that we see visually. The film looks flat-out stunning and with cinematographer Hoyte Van Hoytema we get the scope we are used to in his films. It’s all incredibly fluid and it makes for a visually delicious kind of experience that we don’t get from most action films, and with a musical score from Ludwig Gorannson pushing it along, there’s no wonder it’s so easy to get swept up into the visual ballet that this film unfolds.

However, where it fails is in the science fiction of “time inversion”.  Not that it’s particularly hard to follow, it's just that it goes so out of its way to keep explaining itself that it sucks most of the emotional joy out of the film. There simply isn’t any level of emotion invested into the characters, and some of them don’t even have actual names. Instead the film relies on the action to drive it all, which can work - but it would have been nicer to care, even slightly, about some of these people, in between all the explanations that they shout at one another.  Plain and simple, Nolan needed another set of eyes on this, because while it may have made sense and been engaging for him, it only partly hits the mark - and that’s thanks to a couple of very good performances from some of his leads. John David Washington as “The Protagonist” is clearly in the shadow of his father, Denzel. He centres the frame, not necessarily with action swagger, but with a sense of authentic bravado as an intense man who knows exactly what he is capable of, a man who doesn’t hesitate when faced with a burning building, a man who knows how to kick down all the necessary doors.  The wonderful Elizabeth Debicki more than carries her own as a desperate woman married to a terrible oligarch husband who is intent on bringing down the world. He in turn is played by a flatlining Kenneth Branagh, offering yet another cliched droll Russian accent in an annoyingly mediocre performance. Robert Pattinson is more of a supporting player and Aaron-Taylor Johnson trips over his lines far too quickly. There is however, a brief but engaging cameo from Nolan stalwart Michael Caine as, appropriately, "Sir Michael".  Ultimately though, Tenet, despite being an entertaining diversion, falls markedly beneath the hype.