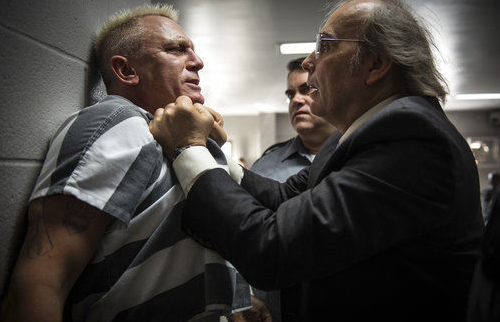 Not too many years ago, Steven Soderbergh announced that he was retiring from making films – however, he clearly missed that canvas and wood chair, so here is, helming once more. Logan Lucky is, in essence, a yarn about a complicated heist, with a passing resemblance to Kubrick’s thrilling 1956 racetrack robbery “The Killing.” The tale unravels of an improbable but agreeable outfit of West Virginians at the lower end of the social-economic spectrum, who pull off an elaborate theft at the Charlotte Motor Speedway. Chief heister is Jimmy Logan (Channing Tatum), a divorcee whose main pleasure in life is the time he spends with his daughter Sadie (Farrah Mackenzie). She in turn lives with her mother Bobbie Jo (Katie Holmes) and her new husband Moody Chapman (David Denman) and his two sons. Little Sadie is preparing herself for a talent show in which she intends to perform a Rihanna song, but time spent with her father is precious when it happens and his dodgy musical influences (such as John Denver) impact upon her repertoire.

Jimmy has been sacked from his job handling a bulldozer at a repair job at the speedway, as he was seen limping from an old football injury—which apparently could cause insurance problems. Prior to his being dispensed with – he happened to notice that all the cash taken in during a race was still being transported to the underground vault via a pneumatic tube system which could very easily be hacked. Jimmy enlists his brother Clyde (Adam Driver), a permanently downbeat barman who lost his lower left arm in Iraq and now has use of a prosthetic replacement. Despite the fact that Clyde is convinced they both suffer from a family curse that will doom the scheme, the robbery plans kick into place. Their sister Mellie (Riley Keough) also becomes involved.  However, for the plan to work, they require the services of appropriately monickered explosives expert Joe Bang (Daniel Craig). Unfortunately Joe is incarcerated, and so the robbery has to be preceded by a jailbreak—one that, however, will be engineered so that his absence won’t be noted. This will necessitate orchestrating not only Clyde’s getting jailed with him, but a riot that the warden (Dwight Yoakum) won’t report, to preserve his exemplary behaviour record. There are many other characters but the script is so studiously laid out, Soderbergh’s direction is so secure, and his editing so smooth, that everything clicks together well, with the shifts in tone pleasant rather than jarring. The zanier turns by MacFarlane, Quaid, Gleeson and especially Craig, whose send-up of the tough-guy stereotype marks a great change of pace for the actor and shows a fine degree of versatility. 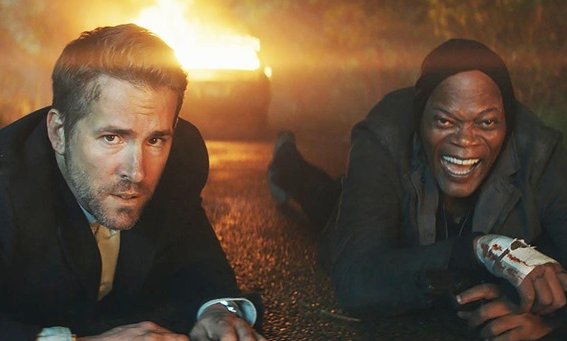 The Hitman's Bodyguard is an ugly, repetitive, and nihilistic piece of supposed entertainment but featuring three main constituents - yelling, violence and saying 'motherfucker' as often as possible. Two men who kill everyone around them, hate each other and constantly yell at one another. It just feels disingenuous that the film takes such glee in the substantial bloodletting. It might work if our pair of protagonists had some redeemable qualities, but they don't. One is a disgraced security professional, who lost a client to a sniper, and, since then, has been taking clients of less renown or infamy. The other is a professional assassin, who, by his own account, has killed at least 250 people, but this apparently is excusable as they were ‘bad guys’. This, however is not the problem. The problem is that both characters are tedious, dull and unappealing, despite the fact that they're played by Ryan Reynolds, the current Hollywood jester of sarcasm, and Samuel L. Jackson, the perpetually alleged (please tell me why) king of cool. Michael Bryce (Reynolds) is the security professional, and Darius Kincaid (Jackson) is the hitman. Kincaid has some dirt on Vladislav Dukhovich (Gary Oldman doing his usual foreigner with broken English guff). What on earth has happened to Oldman – once an actor of real integrity? Here he is as the dictator of Belarus who's on trial for human rights violations at the International Criminal Court in The Hague.

This is where the screenplay by Tom O'Connor (surely not the ancient bland Irish comedian – but then who knows looking at this?) makes its biggest error. Dukhovich is a genocidal monster, whom we meet in a scene during which he murders the family of a school teacher who has been speaking out against him. The climax involves pictures of Dukhovich participating in a mass murder. We're supposed to be outraged at this violence (which is never shown, by the way) but take some sort of enjoyment out of the rest of it (which is shown in blood-splattered-on-the-camera detail). There's a drastic tonal shift whenever Dukhovich appears on screen. After the Interpol convoy transporting Kincaid is ambushed by Dukhovich's goons, Bryce and Kincaid have to work together to get the assassin from London to court in The Hague, so that he can testify before an absurd deadline. It's a road trip story, in which the two guys hate each other but grow to respect each other by the end. Plenty of flashbacks try to make them more sympathetic – but ends up with both just being pathetic – and that just about sums up this disgrace of a film.

The story begins with the start of—depending on one's perspective—the riot, the uprising, or the rebellion. The violence and looting started after a police raid on an unlicensed night club on the west side of the city of Detroit. At a private party there, some people are celebrating—drinking, playing games, welcoming home a pair of soldiers from Vietnam. The only thing that makes this particular party worthy of police scrutiny is the fact that everyone in this club is black. It's 1967, and that's the way it was then. The police break down the door to the club. The partygoers comply with orders, with only a few yelling about their rights. They know not to make this unspoken something into something unspeakably worse. The officer in charge, an African-American, pulls a man into a side room, and the man turns out to be an informant. The person whom the cops were looking for isn't at the club, but this has started and it has to end. The cop and the guy put on a sound show for the partygoers—to make it appear as if this is a cop who's willing to beat anyone who doesn't follow his orders. It works and everyone leaves out the front door and waits for the vans to take them to jail.  A crowd begins to assemble and protest - soon enough - a bottle is thrown. Just as the cops are preparing to drive away from the scene, the number of bottles and rocks increase. Someone breaks a lock off the gate to a store, and someone else starts to smash the store's window. This kind of activity and more would continue for five days. Forty-three people would be killed—most of them civilians. The Michigan Army National Guard and a pair of divisions of the U.S. Army would bring jeeps, tanks, and an arsenal of military weaponry to the streets of what was, at the time, the fifth most densely populated city in the United States.

And so begins the narrative of Detroit, a tense, thoughtful, and uncompromising film by director Kathryn Bigelow. The film itself begins by reminding us that the prelude to the events of Detroit in 1967 began well before this. There was the Great Migration of African-Americans from the rural south to the rest of the country during the First World War. There was the exodus of whites to the suburbs following World War II. Against the backdrop of oil paintings depicting these events, the prologue concludes by noting that wealth and opportunity shifted away from black communities, where the only white people left were the police who patrolled the streets. The film is not journalistic, although its dramatised narrative of events is based on the best available testimony of people involved. It's not an act of activism, either, although the film's outrage about the abuse of power of the local police and the intentionally blind eyes of the state police, as well as the armed forces, is palpable. What's fascinating is how the screenplay starts with the riot, with Bigelow intercutting archival footage and news reports to lead us through the first three days. A politician addresses some protestors, openly wondering why this is happening. The film's depiction of one event, in which a series of crimes were perpetrated and left unhindered by various members of law enforcement and the military, reveals the systemic corruption and racism that led to the outburst of decades of suspicion against, fear of, and anger about a system that has failed African-Americans. At first, the film's narrative tapestry is wide, but it progressively narrows in focus as an assortment of characters are brought together in the annexe of a motel just outside the perimeter of where the rioting is occurring. Those characters include Larry (Algee Smith), the talented lead singer of The Dramatics, an aspiring doo-wop group, whose appearance on the stage of the Fox Theatre is hurriedly cancelled when the police evacuate the building, as well as the singing group's equally young assistant Fred (Jacob Latimore).

There's also Melvin (an excellent portrayal from John Boyega), who works for a security company at nights after his shift at an automotive factory is finished. One of the stores for which the company handles security wants some guards at the shop. He greets the incoming National Guard with a smile and pot of coffee, just so they know he's on their side. At the Algiers Motel, where Larry and Fred stay to get out of the chaos, are Julie (Hannah Murray) and Karen (Kaitlyn Dever), two young, white women visiting from Ohio to get away from their families. A Vietnam veteran named Greene (Anthony Mackie) is staying there, too.

Someone at the motel has a starter pistol, and his idea of putting some fear into the National Guard brings a slew of law enforcement and military personnel to the annexe. Among them is a trio of Detroit cops—Krauss (Will Poulter), Demens (Jack Raynor), and Flynn (Ben O'Toole)—whose first appearance has them discussing how they've failed the African-American community. Krauss' idea of what the cops should do to "help" is displayed when he shoots a man carrying bags of groceries in the back. The film's centrepiece is a seemingly real-time recreation of what happened on the night of July 25, 1967 at the Algiers Motel. It's a story of torture—physical attacks and psychological abuse that includes mock executions—and, ultimately, murder. All of it is perpetrated by police officers who are too thick to understand what the "game" is and too blinded by racism to see that they're doing anything wrong. Most of all, they're too comfortable within their positions of authority to believe that there will be any consequences. This is especially true when all of the witnesses whom this system would believe are either in agreement with what's happening or too scared of the political repercussions to stop it. It's a sequence that's nerve-wracking in Bigelow's use of tight close-ups and harrowing in its depiction of cold-eyed, amused, and, eventually, desperate evil. An investigation proceeds, and a trial begins two years later. In the context of continuing abuses of power and authority, all of it becomes a harsh reminder that, even though we may learn from the past, we still seem doomed to repeat it.