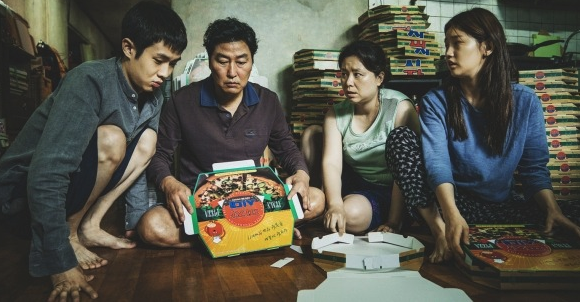 Hanging socks appear in the foreground of the opening shot, dangling from a ceiling. Parasite director and co-writer, Bong Joon-ho, uses the shot to show us a random alleyway in Seoul, somewhere up over a murky room surrounded with dirty socks. This is part of the living space occupied by the Kim family who are distressed as the signal accessed from their upstairs neighbours is now password protected, thus removing their illicit access to precious wi-fi. Their only option is to raise their phones to the ceiling, past the putrid socks and over the toilet that sits perched on a pedestal. Looking for a signal that will connect them from their cramped living space - they scramble to reach the world above, this sequence opens Parasite which is both audaciously funny and upsetting. This opener tells us what we should now expect. The Kims are desperate and destitute, part of the sub-strata of Korean economic and social life. Shortly after they lose their signal, a cloud of fumigation smoke wafts into their tiny home, which is infested with bugs. The film uses the initial play between the Kims’ subterranean existence and the world above to introduce a metaphor Bong will turn over, mine, invert, and reprise repeatedly throughout its two-hour running time. Bong makes it clear from the film’s opening minutes that this is a feature about class. But what that means—and how that plays out through the Kims’ efforts to achieve a higher status is never settled, perhaps, until the last shot. Delving into issues of inequality, alienation, masculinity, and violence as they are experienced in contemporary Korean life without seeming too allegorical, Parasite offers a narrative and aesthetic invention that makes ideas that might otherwise seem blatantly obvious, feel decipherable only upon contemplation of it as a complete, fully realised work. As it opens, the Kims earn cash by freelancing for a local pizza chain assembling boxes. Scrounging for every penny, the Kims’ teenage son Ki-woo (Choi Woo-sik) lowers himself to haggling with the restaurant’s manager for a permanent post. This doesn’t satisfy his ambitions. Subsequently, when Ki-woo is offered a professional opportunity through a friend that requires a bit of personal misrepresentation, he quickly rationalises away the dishonesty it entails. As Ki-woo explains to his father, Ki-taek (Song Kang-ho), justifying his initially forgery, he sees the manipulation he engages in less as a lie than an acceleration—representing himself as having attained a certain status that he’ll reach eventually, though he hasn’t yet. In other words, he may be lying about where he is, but not who he is. With this act of fraud, Ki-woo wedges his way into the lives of the Parks, a wealthy Seoul family that is no more emotionally stable than the Kims, despite their comparative privilege. Husband and father Dong-ik (Lee Sun-kyun) has earned a fortune, but his kind, naïve wife Yeon-kyo (Jo Yeo-jeong) moves through life at such a level of remote disaffection that her maid (Lee Jeong-eun) needs to clap within earshot to get her attention. Their two children are faring no better: their teenage daughter engages neither with her studies nor her surroundings, instead fixating on Ki-woo as a romantic interest; their young son, meanwhile, has a trauma from an early age that he expresses through an obsession with Native Americans and a distressing art practice that his mother actually celebrates. The Parks are Bong’s foil for the Kims, the upstairs to their downstairs. Yet while it is clear why the Kims might want their home and their things, it is less evident that their lives deserve envy.

Seeing in the Parks an opportunity for social ascendency, Ki-woo takes advantage of every opportunity his new employers give him to infiltrate their lives. His initial success sets off a series of events through which Ki-taek, as well as his sister, Ki-jung (Park So-dam) and mother, Chung-sook (Jang Hye-jin), similarly insinuate themselves into advantageous situations with this wealthy family under false pretences. Deftly, Bong never invites judgment of the Kims, nor does he provide space for judgement of the Parks. By assuming an aura of impartiality, Bong brings the ideas his film pushes forward. We aren’t asked to take a position on the Kims’ decision making, instead, we’re forced to grapple with why they do what they do and what it tells us about the urgent issues with which the film engages. “It is so metaphorical,” Ki-woo exclaims of a gift given to him by a friend. It’s a joke, because Bong knows that we are thinking the same thing about his film. His brilliance lies in making us realise that we never quite have full access to the metaphor. We know we should be reading the film as a study of irreconcilable social division and its effect, but we are never told how to read it. So who is the parasite? The film gives ample evidence for arguing that the rich feed off the labour of the poor, that they exploit and judge those who do the real work that makes their lives possible. It also largely aligns itself with the other perspective, presenting the Kims and the other working-class characters that populate the picture as living off the lifestyle of the wealthy. If the Kims’ almost subhuman status wasn’t clear in the early fumigation sequence, at one point, Bong actually reduces them to scurrying across a floor in the middle of the night like cockroaches. But, is this meant to make us see them as parasitic, or to criticise this notion? Co-written by Bong and Han Jin Won and swiftly paced by editor Yang Jinmo, the first half unfolds as an elaborate, funny, and constantly surprising setup. In its second half, it glides towards a reckoning. Minute to minute, this makes for a delightful master-class in genre filmmaking. As the Kims’ dangerous gambit unfolds, every major character does something that is morally repugnant, with shocking consequence. Parasite is a deadly serious film however, and by the time he ends it, with a melancholic image that deliberately evokes his opening, Bong reveals he has more sinister designs on his characters—and his viewers—than it initially appears.